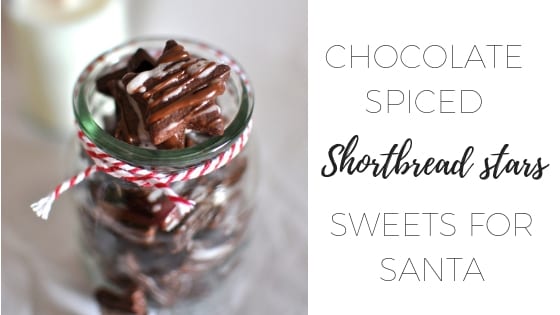 Chocolate spiced shortbread biscuits are the perfect Christmas cookie. The texture of shortbread with the flavours of a hot chocolate. What’s not to love?

One Christmas when I was little my cousin let me in on a little secret. He is 6 years older than me so much wiser and we were chatting about Santa. He said to me ‘if you ever hear Santa on Christmas Eve, keep your eyes shut and don’t try to catch a peek of him. If you look, he won’t visit you again.’

From that day on I never once opened my eyes if I heard Santa at the bottom of my bed. Even since I moved out of home four years ago I have returned to mum and dad’s house to stay on Christmas Eve so that Santa knows where to find me. In my eyes you’re never too old for Santa!

I feel terribly guilty to admit it but while I’ve been hanging my stocking on Christmas Eve every year, it has been a long time since I’ve left a little treat for Santa to thank him for his gifts. Oh how he used to enjoy his milk and cookies (I think we even left him a beer one year which he liked even more than the milk!).

When I saw this month’s Sweet Adventures Blog Hop theme was ‘sweets for Santa’ I knew this was my year to make up for years of neglect. Seeing as Santa has to visit so many houses and I’m sure he receives treats from nearly everyone, I thought teeny tiny biscuits might be more his style with a little sip of milk.

Making up the dough

He can pop one chocolate spiced shortbread star in his mouth then take the jar filled with the rest home to share with Mrs Claus and all the elves. They do deserve a reward for all their hard work after all.

I’m sure they’ll appreciate the buttery biscuit. They’ll love the way it crumbles in their mouths with just a tender bite and the way the spices burst in every mouthful, that is if they make it home with Santa. He mightn’t be able to resist eating them all himself.

It’s a bit of a strange recipe this one with the only ‘wet’ ingredient being the butter. Try as I might just couldn’t get the dough to come together so I added a little bit of yoghurt. That seemed to do the trick and it came together nicely.

Now all my American readers I mean you no offense (you know I love you) but boy you guys do things big over there. This recipe says that it makes 20-24 cookies.

Admittedly I made baby stars but just less than half the dough made 70 cookies. I froze the other half of the dough for later.  Their stars must be enormous!

You can decorate these however you like. I topped them with a chocolate and royal icing drizzle but the rest of the dough I made into Christmas trees and decorated like this. Just make sure you put a sheet of baking paper underneath to catch all the drips.

I probably should have mentioned in the note that they were for him to share but I’m sure he’ll realise they’re not all for him because there’s not nearly enough milk to wash them all down. Enjoy Santa!

What about you? What are you leaving for Santa this year?