How to make cinnamon sugar 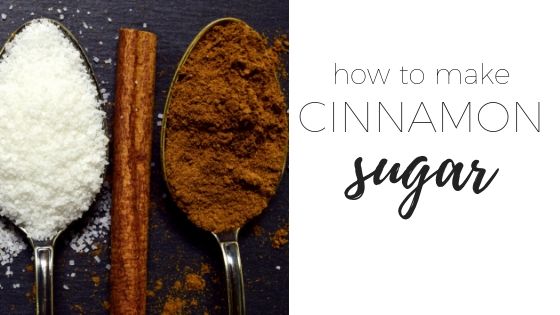 How to make cinnamon sugar that is perfect for topping cakes cakes, donuts and desserts or even a delicious hot chocolate.

How to make cinnamon sugar

The smell of cinnamon always instantly makes me think of my Grandma. When I started working for myself and had a flexible mid-week schedule, I used to take her out every couple of weeks for morning tea.

One of our favourite things to have was cinnamon toast at a cafe not far from her house.

It was thick toast (the thickness that is really the size of two slices of bread but cut as one), slathered with butter and topped with the most deliciously sweet cinnamon sugar.

I can almost taste it if I close my eyes.

But our love of cinnamon sugar started a long time before then with cinnamon tea cake.

It was the very first cake I ever learned to bake and I learned how to make it in my Grandma’s kitchen.

We used to mix up the sweet cinnamon topping in a tea cup and sprinkle it over the cake after covering it in butter fresh out of the oven.

If I was lucky I’d get an extra lathering of butter on my slice of cake and a little (ok more than little – my Grandma was very generous with sweets) sprinkle of cinnamony sugar on top.

The perfect ratio is 3 tablespoons of sugar (caster sugar is best – we’re going for taste not health benefits here) to 1 teaspoon of good-quality cinnamon.

It can be used to top cakes, biscuits, donuts and of course if you’re after a serious indulgence, toast (definitely not an every day food but delicious none-the-less.

Recipe can be doubled or tripled if covering a large cake or making donuts.