How to make cinnamon tea cake 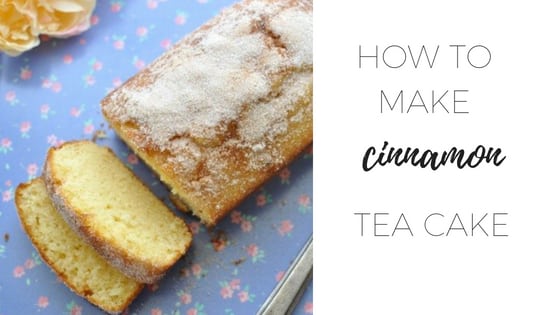 If you’re looking for instructions on how to make a cinnamon tea cake look no further.

This is one of the simplest and most delicious tea cake recipes you’ll ever make.

How to make cinnamon tea cake

A few years back I learned that in my last year of school, Mum and Dad would wake up on a Sunday and Mum would turn to Dad and say ‘it’s tea cake day.’

On Sundays, we often had ‘Sunday lunch’ which was typically a BBQ chicken, a scotch loaf (the most delicious, soft, white fluffy bread) and probably salad but back then I wasn’t a salad eater.

I was pretty much white food only. Don’t worry I’ve come a long way.

I got into a little bit of a habit of whipping up a tea cake (topped with cinnamon sugar) every Sunday afternoon after lunch. It became my Sunday routine.

Half of it, I’d slice up and pop in the freezer for my morning tea throughout the week and the rest, well let’s just say it was enjoyed.

My favourite piece was the crunchy end and I’d often lather the slice in butter while it was still warm.

Now, being a mum who has to make school lunches every day I can’t wait for the day my boys bake something for their lunchboxes on a Sunday arvo!

Wow
Have to say one of the best cakes I’ve ever had.
So moist so delicious. I sprinkled cinnamon sugar over the top as I mixed cinnamon in the cake mix & will definitely be making it over & over again.
Thanks Claire so much for sharing.

Cinnamon tea cake is the first cake I ever learned to make.

My Grandma Guppy, who died last month at the grand age of 100 (almost 100.5), taught me in her kitchen when I was about 4 or 5 and I have inherited the original ‘tea cake tin’ which bares a few dints and marks from its many years use out in the bush before starting city life.

I don’t think I’ll ever forget memories of making tea cake with her and lathering it in butter then sprinkling on the cinnamon and sugar – which had to be in the perfect ratio of cinnamon to sugar.

If I close my eyes I am there.

I can smell the cake and the cinnamon and see her hands. I can see the plate too. A small, side-plate size with yellow around the outside and a blue trim. It’s memories like that that help me get through the grief.

I just made this tonight, and it was my first bake from scratch – it was amazing! The recipe was very easy to follow. I took advice from another review and added some extra cinnamon (I love it so much) and couldn’t be happier with the results. Thank you for this. It’s going to be a new tradition in my family as well :)

I can’t wait to teach my boys to make it too and keep the memory alive.

I’ve made it more times than I can remember and I still love it just as much as I did when I was little.

So much so that a few year ago, I made a little video of it (yes I look rather a lot younger – that’s because I was – pre kids!).

Apart from the fact that it now reminds me so much for my beloved Guppy, it’s also budget friendly, easy enough for kids to make and really quick.

Plus, it’s made out of ingredients you most likely already have at home yet another reason why I love this cake and I know you will too.

Oh and… you can make it into cupcakes if you want or add two tablespoons of cocoa to make a chocolate cake. So it’s versatile as well.

What is tea cake and where did it come from?

If you guessed that tea cake originated in the UK you are correct. This type of cake was originally created as a breakfast or mid-morning food served to the workforce who couldn’t get home for food.

Other sources claim that it got its name from being the cake served with tea in the afternoon in classic English cultures. I personally wouldn’t mind it at any of these times.

Some also claim that the original tea cake contained dried raisins or sultanas that had been soaked in tea before being added to the cake.

Can you use margarine in place of butter in tea cake?

In terms of the cake turning out – yes you can use butter in place of margarine. BUT, I am highly against margarine. It really isn’t great stuff usually loaded with trans fat which can contribute to heart disease. It’s factory-made stuff and I’m all for natural as much as possible.

What’s the first cake you ever baked?

Do you still make it?

Be sure to follow me on Instagram and tag @clairekcreations so I can see all the wonderful Claire K Creations recipes and creations YOU make!

I created a fun little group on facebook and I’d love for you to join in! It’s a place where you can share YOUR favorite recipes, tips, tricks and tools for making life simpler, more natural and more connected and see what’s new around here (so that you never miss a new recipe, tip or trick)! If you’d like to check it out, you can request to join HERE.

If you’re after a healthier cinnamon delight then you’ll love my Paleo cinnamon pancakes.