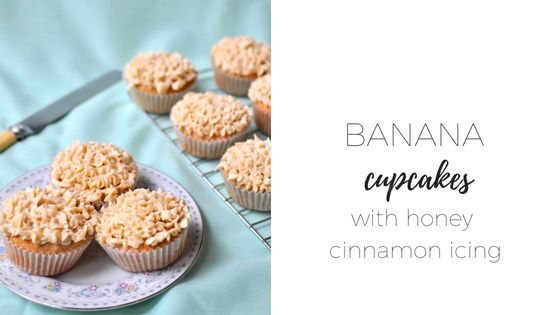 Banana cupcakes with honey cinnamon icing are like the best banana bread ever but with icing!

I’m going to let you in on a little secret… these cupcakes are a-ma-zing.

I wrote this post first back in 2013. I could edit the story but, I like the little messages from past Claire so enjoy the story (or skip down to the recipe!).

It’s a secret because these banana cupcakes with honey and cinnamon icing are my Secret Recipe Club creation for August.

I took a couple of months off while we were away/moving but I am back into it with a bang.

In fact, quite unusually for me, as soon as I was allocated my blog to squirrel through – Kitchen Trial and Error – I chose a recipe and made and photographed it the next day.

How’s that for organised?

The description of banana bread-like cupcakes but with icing pretty much sold me.

What could be better than banana bread than having it in cupcake form with sweet, cinnamon icing?

Oh that is if you don’t count banana bread cupcakes fresh from the oven spread with a little icing.

They smelled just so wonderful I couldn’t resist.

I encourage you to do the same if you have any to spare (cook’s rights and all).

I took them to mum and dad’s house for dessert for farewell dinner (my lucky Mum and sis are travelling around Europe at the moment) and even though Mum was leaving the next day, she made me leave the leftovers for her breakfast.

That says a lot because Mum doesn’t have much of a sweet tooth and she’s really picky when it comes to baked goodies.

I must admit, like usual I had a tough time choosing a recipe.

Kate (from Kitchen Trial and Error) has so many wonderful recipes and she takes great photos so I was totally sucked in.

I could have looked no further than brown sugar espresso choc-chip cookies on her front page but I did my due diligence and delved a little deeper.

Kate lives in New York state with her husband and beautiful baby boy and like me loves making things like bread and butter from scratch (she’s a girl after my own heart).

Make sure you pop in and say hi and try out one of her recipes, but start with these cupcakes.