Quick tip for tidying up around the house 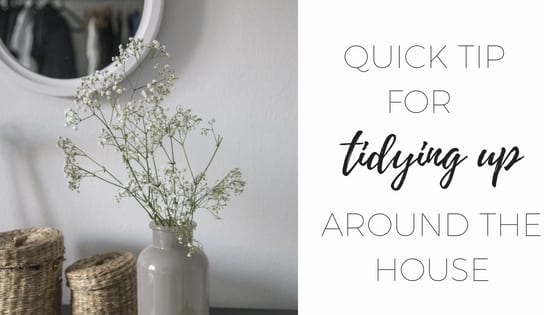 Seriously, I feel like some days all I do is pick stuff up. Toys, crayons, lego, random clothing items… it’s never ending. That’s why I love this quick tip for tidying up around the house.

Quick tip for tidying up around the house

I was going to say I don’t know why I feel like I spend the majority of my days picking stuff up off the floor but that would  because… well I do some days!

One day my kids will learn to pick up after themselves right?

I must admit, since we got our gorgeous little Frenchie puppy Betty a month ago, the house has been a lot tidier. I guess it’s because A they spend more time playing with the puppy than playing with toys and B if they leave something on the floor, the puppy will eat it (she also does a great job of cleaning the crumbs but that’s another story).

So moral of the story – for a tidy house get a puppy. Totally kidding!

After complaining to… well probably just whinging to myself, I came up with (let’s be honest I probably saw the idea somewhere and thought ‘I’ll have to try that’ then forgot about it) the tidy up basket. I made a video about it a while back.

So basically, you get a big basket, but not so big you can’t carry it around, and pick up everything and throw it all in the basket.

Don’t make the mistake of finishing there or you’ll regret it later.

How to clean jewellery at home.

I then take the basket to each room of the house and unpack and put away any items from the basket that belong in that room.

It saves time, energy and back-breaking labour (I may exaggerate but I do get a sore back sometimes).

I hope this can help you with the constant pick up!

If you liked this then I think you’ll love my post How to Fold a Fitted Sheet.