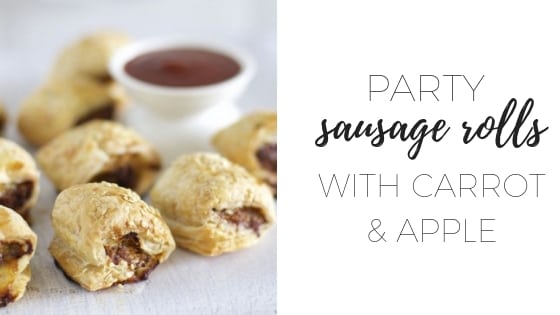 These party sausage rolls are super easy to make, delicious and have some hidden goodness. They can be made ahead and frozen as well.

One of my best friends has a younger sister. Well actually she has two but for the purposes of this story I’m referring to the older of her two younger sisters (are you confused yet?) who is a great friend of my younger sister.

Because my sister and I were both friends with sisters, our families became great family friends and their family is known for throwing rather wonderful parties.

A few years back, their mum catered their dad’s 60th Birthday for more than 100 people then turned around and hosted family Christmas (they have a massive family!) a few days later. The food is always amazing because their Mum is a great cook but there are two party dishes that my friends and I always go crazy for, – cob loaf dip and party sausage rolls.

I know there are about a million sausage roll recipes out there. In fact I think I have three on the blog already but these are seriously good. They have very few ingredients which makes them easy to make and have added goodness like apple, carrot and celery.

They never seem dried out at all and are the perfect balance of flavours. I really insist that you make these and I’m going to go out on a limb and call them the best ever party sausage rolls.

Here are a few extra tips to perfect the best ever party sausage rolls: