How to keep the kids kitchen stuff under control 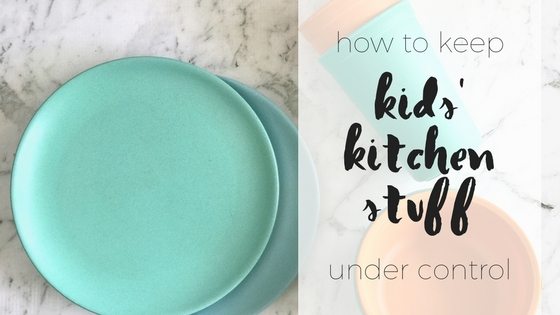 How to keep the kids kitchen stuff under control – how making little changes can make a MASSIVE difference inside the house.

How to keep the kids kitchen stuff under control

I’m going to share a little change I made in our kitchen that has made a BIG difference to my sanity levels (aka how to keep the kids kitchen stuff under control).

A few months ago, I’d put the kids to bed and I was doing the big pickup… you know all the stuff that the kids manage to spread from one end of the house to the other.

How did two little boys manage to use 8 bowls in a day. Actually they used more than that because there were a couple already in the dishwasher.

I was so ridiculously sick of picking them up, washing them, unpacking them from the dishwasher and them taking up the entire dishwasher.

Plus I was sick of my kitchen being turned into an obstacle course every day when the little guy pulled all the bowls and plates and cups out of the cupboard.

I couldn’t move them to a higher place because all those spaces were already taken up with all the breakables I’d already moved out of his reach.

Yes I used a cupboard lock but any parent knows how frustrating those damn things are when you’re in a hurry, have a screaming child or wet hands.

It was time to make a change.

The next morning when everything was clean, I laid it out on the bench and chose two cups, plates & bowls and put them back in the cupboard then put the rest in a box along with the kids cutlery.

The box of ‘extras’ went away in the cupboard and said that if I didn’t miss it in a week, I’d get rid of it.

It changed my life!

It sounds so simple but it made such a huge difference.

Learn how to create a fancy kitchen photography backdrop.

Now when the kids have something to eat they bring their bowl into the kitchen when they’re finished. I give it a quick wash then it goes back into the cupboard.

Here are some other reasons I love only having one bowl, plate and cup per child:

Yes ideally the kids would eat every meal at the table and not snack but I’m not going to lie. My kids snack, walk around the house eating and they sometimes eat in front of the TV.

The one week trial went fantastically so it was time for our reward.

Seeing as we were just using dodgy plastic stuff from K-mart I invested in a set of bowl, plate and cup for each of the boys and they got to choose the colour. The re-play range has every colour of the rainbow!

I get asked a lot about what I do when the kids have friends over.

You might want to check how to keep the kitchen bench clear.

I’ve got a little basket in the pantry of ‘party stuff’ – paper bowls, plates and cups – and we crack those out when we have guests. The kids love using the ‘party’ stuff and it saves on extra washing up for me. Win win!

I know it seems like such a simple little thing but it’s the little changes that make the difference when it comes to keeping your sanity around the house.

That’s what Kitchen Chaos to Calm is all about. 28 days, 28 5-min, easy tasks to transform your kitchen from Chaos to Calm. The doors for the next round close on October 26 at 9pm (AEST).

I would love to have you.