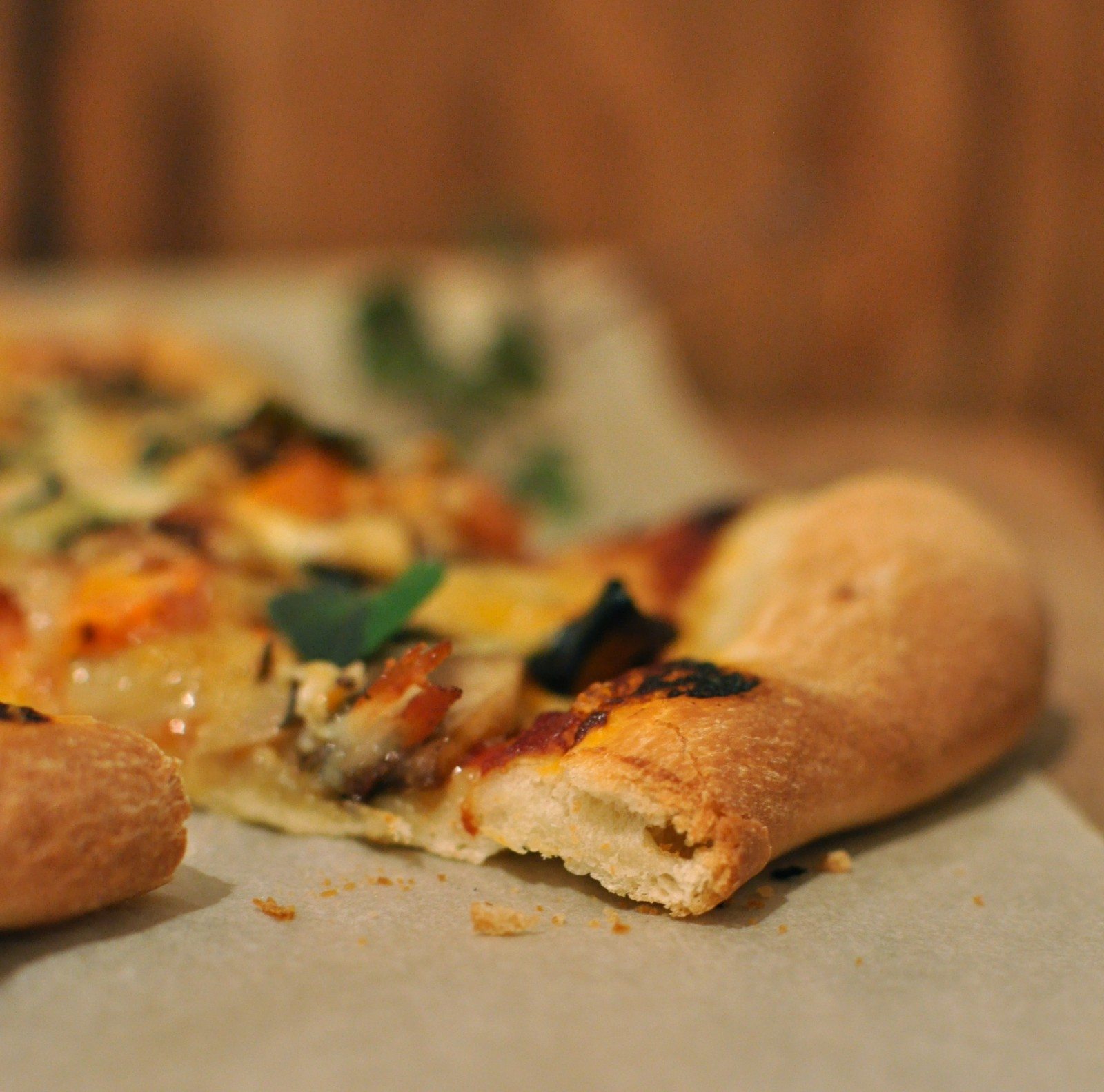 I know I harped on about not choosing favourites in yesterday but another battle has arisen – thick or thin crust pizza? I was a thin crust only girl until the other night when I tried out a new recipe.

Oh boy was this pizza good. It could have been spread with a little olive oil and salt and I would have gobbled it up in no time.

If you think making pizza at home is hard then this is the recipe for you. If you have a stand mixer then the only work involved is measuring a few ingredients and deciding what to top your pizza with.

It is so very simple and the best homemade pizza recipe I’ve come across so far.

I promise you won’t be disappointed!

Put the warm water in the bowl of an electric mixer and then add the yeast and honey and stir them in. Leave them to sit for 5-10 minutes or until the yeast starts to froth. I’ve found the best temperature for the water is about 105F.

Sift in the oil, half the flour and the salt and set the dough hook to work until everything is almost mixed in.

Then with the mixer running, slowly add more and more flour until the dough looks sort of like this. You want to be able to gently touch it with your finger tip without any dough sticking to your hand.

All the hard work is up to the mixer. Turn the speed up to high (I used about 8 on my KitchenAid) and set a timer for 6 minutes. It seems like a very long time but it worked perfectly.

Don’t walk too far away though. It might just be my mixer but it was slowly creeping forward and I fear that without supervision it might have gone for a dive off the bench.

It was as this point that I realised the mistake I have been making with my bread making. Obviously I’ve never kneaded bread enough because this was the first time I’ve ever had a nice smooth dough.

When it’s ready, the bowl will be nice and clean and you’ll have a nice ball of dough.

Oil up the bowl and pop the dough back in it. Spray the dough lightly with oil and then cover the bowl and leave the dough to rest for 1-2 hours or until it doubles in size.

This is what mine looked like after two hours. It was huge!

I couldn’t resist giving it a big punch. You need to do that anyway. Punch it down and take it out of the bowl.

The recipe makes enough for two regular size pizzas (about a delivered pizza size) so divide it in two.

Just before you start, pre-heat the oven to 200C and if you have a pizza stone, put it in the oven.

There’s no real technique to shaping it. If you have any skills you can throw it around like the Italians. I just held one side of it up and kept turning it and it shaped itself.

I flattened it a little more in the middle and left the edges nice and thick so they’d puff up.

Then add some toppings. I used roasted eggplant, sweet potato, some leftover roast chicken, feta, cheese and herbs from the garden. I also brushed the crust with a little olive oil.

Carefully transfer the pizza into the oven and cook for about 20 minutes or until the crust is golden and your cheese has melted.

Ready for next week

The one pizza was enough for the two of us so I froze the dough for another day. Wrap it in plastic wrap and then a zip lock bag and put it straight in the freezer. I left mine on the bench while we were eating and it nearly burst the bag. It will keep rising until the freezer chills it.

I was so impressed with the result. The base was just thick enough to have a bread-like consistency but not so thick as to steal the show from the toppings. I loved the puffed up crust. It might have been nice with a little bit of stuffing.

I’ll save that idea for next time. Ooh calzones would be delicious with this recipe too or maybe garlic bread… I’ll leave it to you.

Doesn’t it look like the pizza is eating itself? No? Just my childish sense of humour?

What about you? Do you prefer thin crust or thick or something in between?