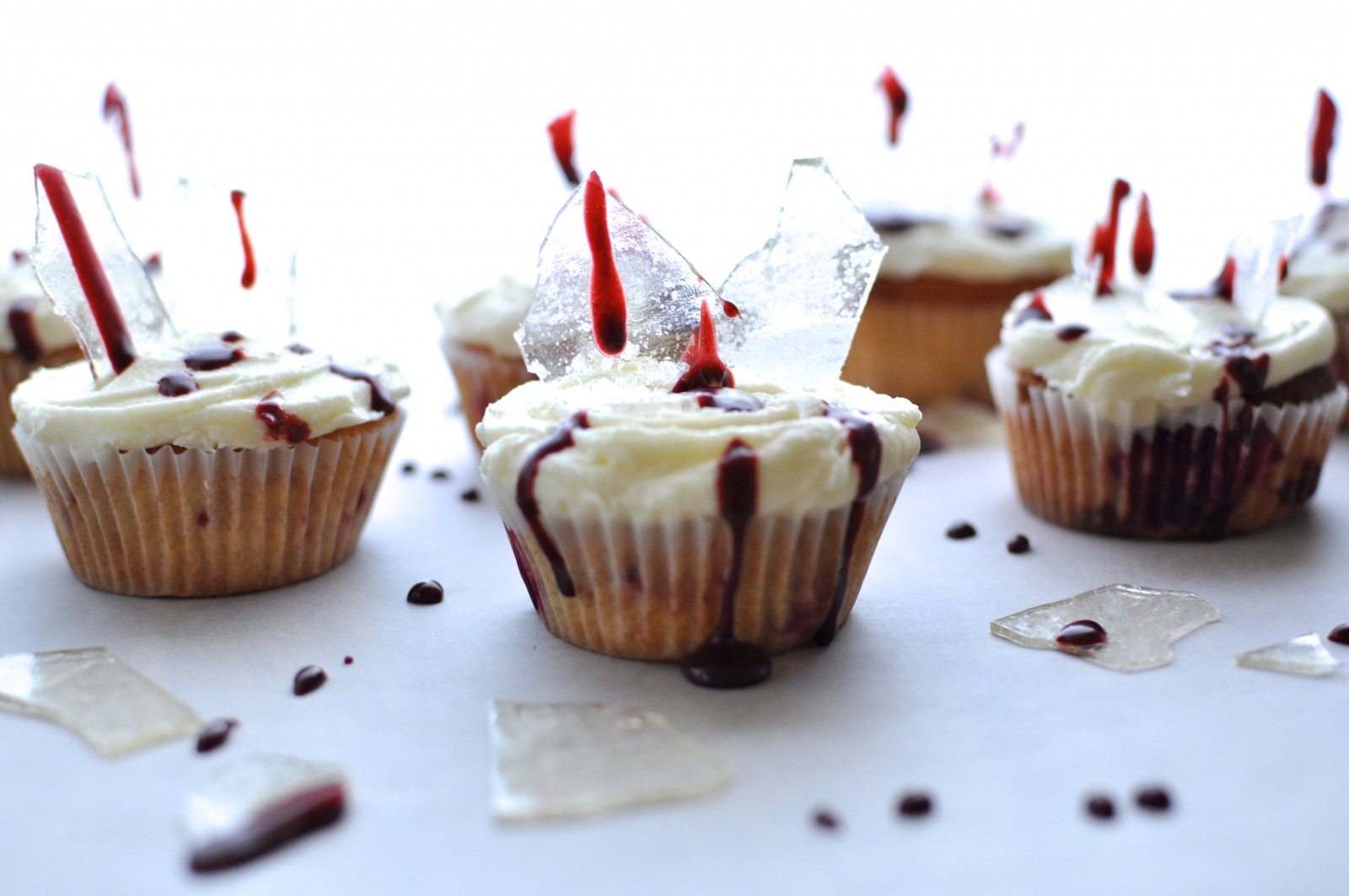 Today may be Halloween but in our house it’s a much more important day. October 31 is Will’s (aka the husband) Birthday.

Perhaps being born on Halloween is the reason he’s so brave when it comes to scary movies and television. Or maybe he just looks extra brave because I’m such a wimp.

A few weeks ago we started watching Dexter from the start of season one and it’s about as scary as I can handle.

While I haven’t been traumatised like I was when I saw Scream at age 12 (that’s a story for another day), it has stuck in my mind.

Eventually, all ideas turn to food in my head and so after seeing these cakes on Martha Stewart I knew I had to recreate them for a Dexter-inspired Halloween and Will’s Birthday.

If you watch Dexter you’ll understand this photo a little better. I got just a little bit carried away with my Dexter cupcake photo shoot.

The hardest part of making these was cooking the toffee but it’s not really difficult, just requires patience and seeing as you can’t really leave it unattended in case it turns, it does take a little while.

To add a bloody touch to the batter, I folded through some mashed up raspberries.

They actually worked so well in the recipe they just might become my go-to cupcakes.

While the cupcakes are baking, get started on the sugar syrup to make the toffee. Firstly, put the water and sugar in a pot and heat it, stirring, until the sugar dissolves.

Once it has dissolved, stop stirring and bring it to a boil.

Reduce the heat a little and leave it to bubble away until the edges start to turn golden.

I always struggle with seeing it change colour in a dark pot so I used my candy thermometer and heated it to soft crack stage.

I used a silicone baking mat covered in baking paper to make the ‘glass.’

All I did was laid out a big piece of baking paper over the top then quickly poured the toffee over it.

Make sure you tilt the sides quickly to make it spread and create nice and thin glass.

If you don’t want to use a baking mat you can use a wide, shallow baking tray instead but be sure to line it with baking paper.

They look dangerously good don’t they?

While the cupcakes are cooling, whip up the icing by beating the butter until it’s soft and light and then adding the icing sugar. If you need to thin it out a bit add a little milk.

Divide the icing between the cupcakes, placing a big blob in the middle of each one.

Use a mini spatula to push the icing around and out to the sides.

I probably went a little bit over-board with the icing but I don’t think you can have too much can you?

You have to leave this step until just before you’re ready to serve the cupcakes or the clear glass will become frosted glass.

To make the ‘blood,’ mix up the remaining icing sugar with red colouring, a tiny bit of black colouring and some water.

Add the water a little at a time until you get the right consistency. Creating the colour is a bit of a hit and miss but if you make sure you only add a tiny bit of black and then add the red a little at a time you should be able to get a good blood-like colour.

Spatter the ‘blood’ over the top of the cupcakes and glass and serve them to your unsuspecting guests. Enjoy!

What about you? Are you good with scary movies? Do you like Dexter?