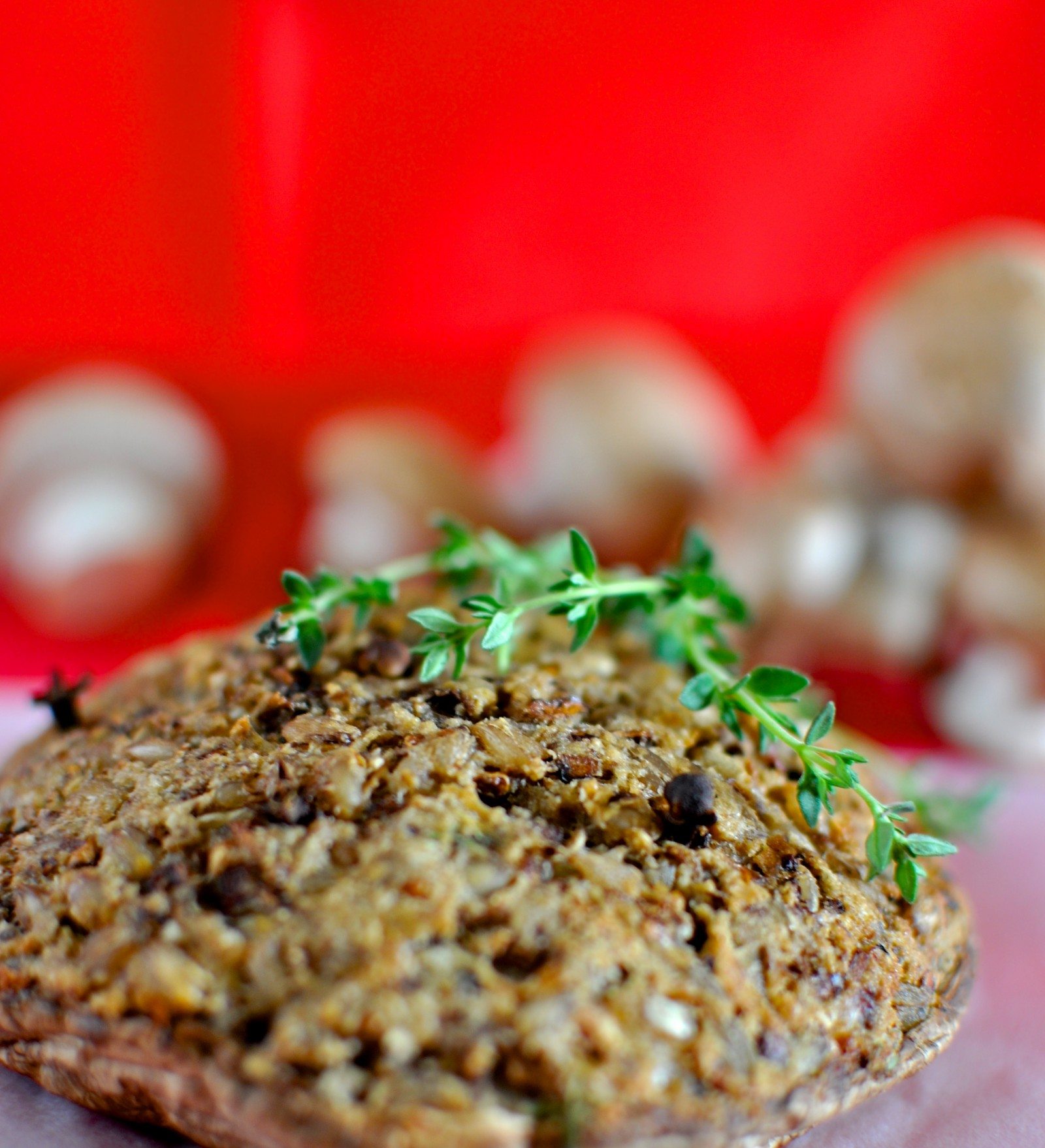 I know what you’re thinking – my goodness Claire that’s not a very pretty looking recipe. I beg you to stay with me though because while this may not be the prettiest recipe I’ve ever posted, it sure is tasty and it makes up for it’s lack of visual appeal with it’s really-good-for-you status.

This year, I’ve developed a love for mushrooms, flat, button, enoki, shitake – I’ll have them all. I’ve ordered them for breakfast, stuffed them into capsicums, eaten them with dinner, made them into a salad and even eaten mushroom ice-cream.

Ever since I found out just how good for you they are, I’ve been hooked. The last couple of weeks I’ve even been having mushroom and feta omelets for lunch.

My latest challenge, as part of the Summer of Mushrooms campaign, was to come up with a Christmas-inspired mushroom recipe that could become ‘the next Christmas ham for vegetarians.’ Ok so I added that last big but as usual, being asked to stick to a theme and create a specific item locked up my creative juices and really had my brain working overtime.

Then, while making our December 1 Christmas ham I thought maybe I could create a cross breed between ham, turkey and mushrooms and so the Christmas stuffed mushroom was born. Despite its rather bland appearance it’s packed full of flavour. The crunchy, golden crust hides a soft flavour packed center finished off with the earthy mushroom underneath.

I don’t know where the idea came from but instead of using rice to stuff them, I used barley, which I later discovered is packed full of healthy things like vitamin E & B, antioxidants and fibre. Add it to the beneficial qualities of mushrooms and this is actually a pretty healthy little dish.

Just in case you’ve forgotten about the goodness locked in a little mushroom let me remind you. They have all the attributes of a super-food; nutrient-rich (with selenium, ergothionene, antioxidants and vitamin D), flavour-rich (their umami counterbalances saltiness so you need less salt in a mushroom dish), low in calories and their easy to buy and affordable.

I buy at least a bag of mushrooms every week from the ‘mushroom man’ at my local markets.

Stuffing the mushrooms with Christmas

My Christmas stuffed mushrooms are really easy to make and you could make up the stuffing in advance then bake them at the last minute. They’re something just a little bit different to your usual Christmas fare. I also think the stuffing would work well in little button mushrooms as a starter. I preferred the smaller ones because there was a greater ratio of crunchy topping to soft inside than the bigger ones.

I finished them off with a few cloves just like a Christmas ham and it was the topping on the mushroom. Please take note though – do not eat the cloves. Colour-wise, they tend to blend in a little once the mushrooms are cooked. I suggest using a set number on each one so you know you’ve removed them all.

Trust me. I accidentally ate one and it wasn’t the most pleasant experience. Unless you want to know what a Christmas tree tastes like (I’m pretty sure they’re clove-flavoured) be sure to remove them all!

Serve Christmas stuffed mushrooms warm with whatever condiments you like. I would suggest a mustard or chutney just like you serve with the Christmas ham. Enjoy!

What about you? Will you be cooking mushrooms this Christmas? If you’re looking for some recipe ideas check out the great selection of mushroom recipes on the Power of Mushrooms website or their Facebook page.

This post was sponsored by The Australian Mushroom Growers Association as part of their Summer Of Mushrooms campaign.