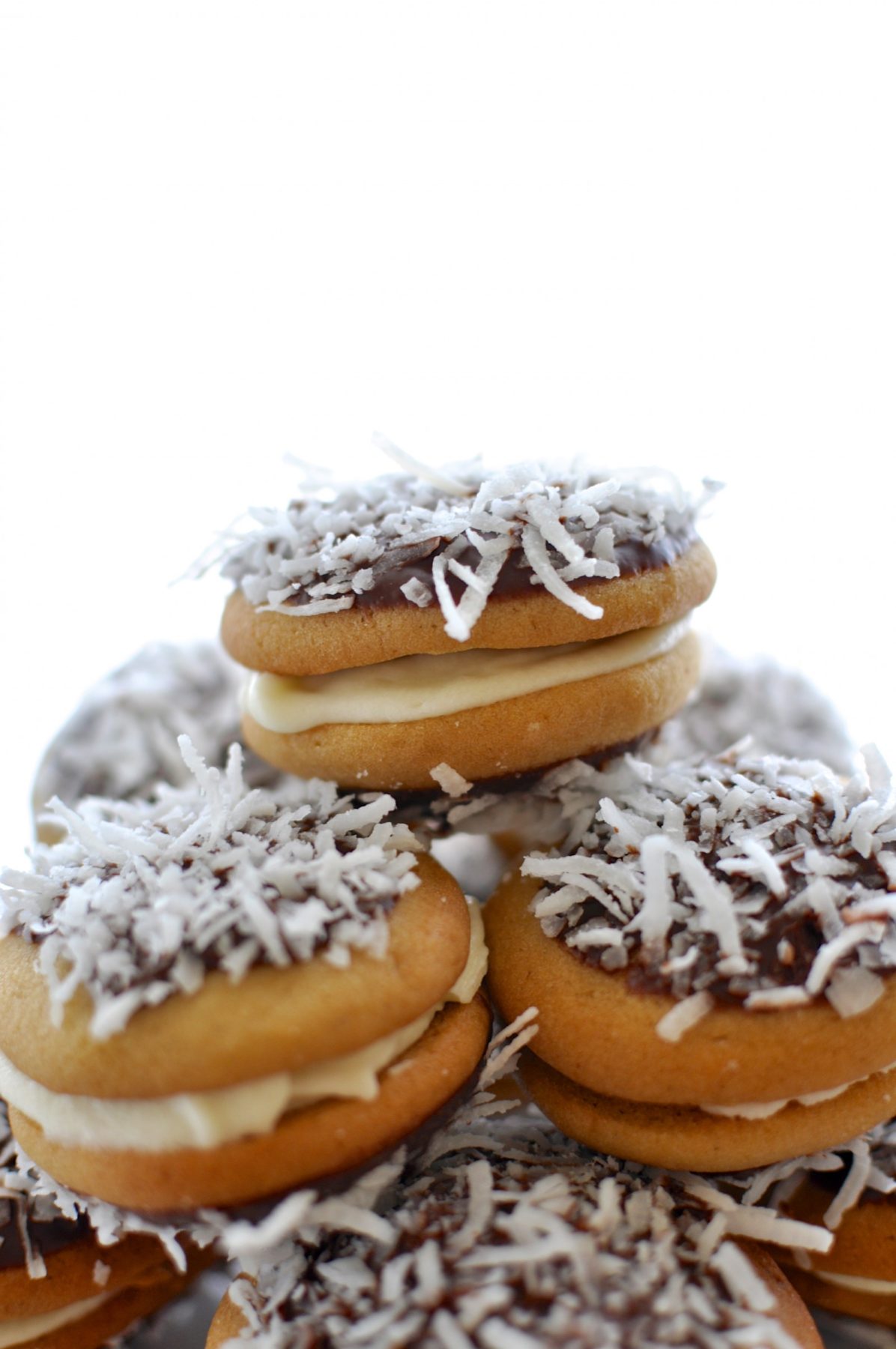 I have a friend who doesn’t like macarons. Yes I still call her a friend despite her flaw (she makes up for it in other ways). According to her, macarons are boring, cupcakes are out and whoopie pies are the next big thing. She can’t understand why the sweet cake sandwiches haven’t taken off in Australia.

Even in New Zealand whoopie pie bakeries are popping up. Now if New Zealand has them then we must be backward and I can say that because I’m one quarter Kiwi. I have to say, there’s not much not to love about a whoopie pie. My favourite part of a cupcake is the sometimes-a-little-crunchy top and basically, whoopie pies are two of these sandwiched together with icing.

Traditionally, the filling is more of a whipped marshmallow but I much prefer my version with sweet butter cream. They’re not usually topped with icing either but I say why not? Seeing as it’s Australia Day on Saturday, paying tribute to the humble lamington was in order.

Now after posting my coconut pannacotta lamingtons the other day, I had a few American readers comment that they’d never heard of, let alone tried a lamington. Oh the horror! So to all of you, a little bit of Australian history for you. There are a few stories of the origins of our Aussie treat but the one I like the most goes like this:

Lord Lamington’s chef Gallad at Queensland’s Government House (QLD is the state I live in!), was called upon at short notice to provide afternoon tea to feed unexpected guests during the busy period leading up to Federation in 1901. Gallad cut up some left-over sponge cake baked the day before, dipped the slices in chocolate and set them in coconut and so the lamington was born.

Ok history lesson over. My attempt, for you Amy, at giving whoopie pies a place in Australia is to pay tribute to our Aussie tread with lamington whoopie pies. I used brown sugar in the cake mix to give them a golden hue and rich molassesy flavour offset nicely by the coconut topping.

If you’ve never made a whoopie pie, the dough is a cross between cake and biscuits. Cake-like in consistency and biscuit-like in baking method. You can buy fancy whoopie pie baking tins to make them round and perfect but I think making them on a tray is easy enough. If you wanted to go OCD on them you could draw circles but you know that’s too much effort for me.

Putting the lamington in

To lamington-ify them, I dipped the tops of each half in melted chocolate and then gently pressed them into the bowl of shredded coconut then left them to set. While the chocolate was solidifying, I whipped up some plain buttercream icing for the filling.

Sandwich the halves together with icing and you’re done.

To me, the best thing about a lamington is that they’re icing in nearly every bite but the little bit in the middle is usually a choc-coconutless mouthful. That’s not the case with whoopie pies. In every bite you’ll get some light, fluffy cake, sweet buttercream, rich dark chocolate and chewy coconut. What’s not to love? Enjoy!

What about you? What do you think of whoopie pies?