How to swap from packet mixes to homemade baking 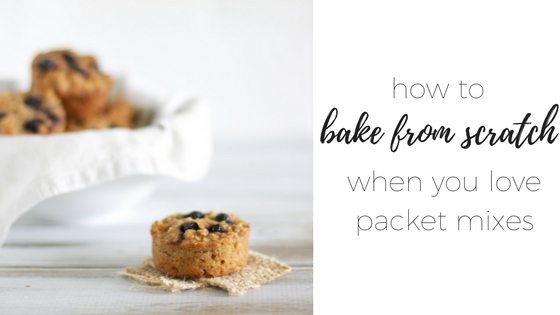 The boys and I are totally famous.

I might exaggerate slightly but we got a half-page spread in the paper on Sunday.

The article was comparing the cost of packet mix baking versus homemade.

The dollar value of the packet mix was less expensive than the homemade but the real price… well what you’re saving in dollars you’re spending in additives and preservatives and fake ingredients.

That’s really all the article said.

While I loved being in the paper it made me a bit sad that there was so much more to the story.

For a mum who struggles to find time to bake so uses packet mixes because she wants to bake for her family, to read this, decide they don’t want to cook with packet mixes any longer, there was no next step.

They were just left completely alone with this new information that what they’d been feeding their family could be doing damage.

I can’t imagine how that would feel. You’d just feel guilty and stressed. Not awesome.

If you compare it with a standard muffin recipe like this one (using regular wholemeal flour and caster sugar instead of rapadura) they come out at 47c per muffin which was mid-range for the packet mixes.

How to switch from packet mixes to homemade baking

Sure, there’s a lot of information out there. A lot of recipes, a lot of conflicting advice but really, all that’s going to serve someone is overwhelm and send them right back to baking with a packet mix.

One thing I always ask myself (after one of my mentors said it to me last year) is ‘what’s the point?’

The point of this article was to highlight the hidden cost of convenience baking.

But what it was missing was the education.

Shannon and I have co-authored an eBook called Crawler Cuisine to Toddler Tucker that is pretty much a bible for easy, from-scratch cooking. I also have a free eBook that includes some delicious, simple baking recipes. They could have been included. But they weren’t.

So I’m going to give you the next step.

If you want to know how to switch from packet mixes to homemade baking without it being stressful or overwhelming I’m going to help you.

You just need to start.

Starting doesn’t have to mean a heap of fancy healthy ingredients when you’re just starting out.

Just making something from scratch using actual flour and sugar is going to be better than opening a packet mix – no additives, no preservatives and real fruit in place of ‘flavours.’

So how do you switch from packet mixes to homemade baking?

… make your own packet mixes!

It’s the ease of a packet mix but the goodness of homemade.

How to make your own packetmix

Mix up the following:

Make sure it is well mixed then divide evenly between two bags or containers.

When you want to make muffins:

If you want to make it super easy, you can print the instructions and pop them with the dry mix so you don’t even have to look for the recipe.

You can use this same concept for any recipe you like.

Just mix up all the dry ingredients and store ready to go.

You could do a whole month’s worth of ‘packet’ mixes in one go – how’s that for convenient baking?

If you like this, you might like my homemade muesli bars. They’re another one you can make up a ‘packet mix’ so all you have to do is add some banana and an egg and you’re good to go!