How to shuck corn in less than 10 seconds 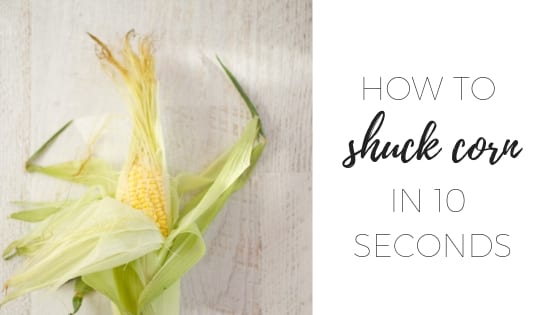 I’m going to show you how to shuck corn in less than 10 seconds with zero hair left to get stuck in your teeth. It’s ridiculously easy and rather life-changing.

How to shuck corn in less than 10 seconds

I really enjoy corn. The kids do too and in fact my younger son used to love it so much he wouldn’t even wait until it was cooked.

Seriously I’d be peeling off the husk and he’d scream at me until I broke him off a few kernels.

Now you probably know I’m all about keeping things simple but husking corn – it’s not my favourite thing to do.

Yes I love corn. No I don’t love husking it. I also don’t enjoy pulling the hairs out of my teeth.

Then I learned how to shuck corn in less than 10 seconds from my friend Rebekah Allen. Seriously – life changed!

It’s funny, when I go away with my mastermind girls we have such raging adventures. One time I learned how to fold a fitted sheet.

Yes ok I know it’s a really simple trick but it’s the little things that add up. Simple, small changes that make life easier that add up to very big changes.

If you can’t watch the video here’s how you do it:

Yes it takes 3 mins to microwave it but you’d have to cook it anyway.