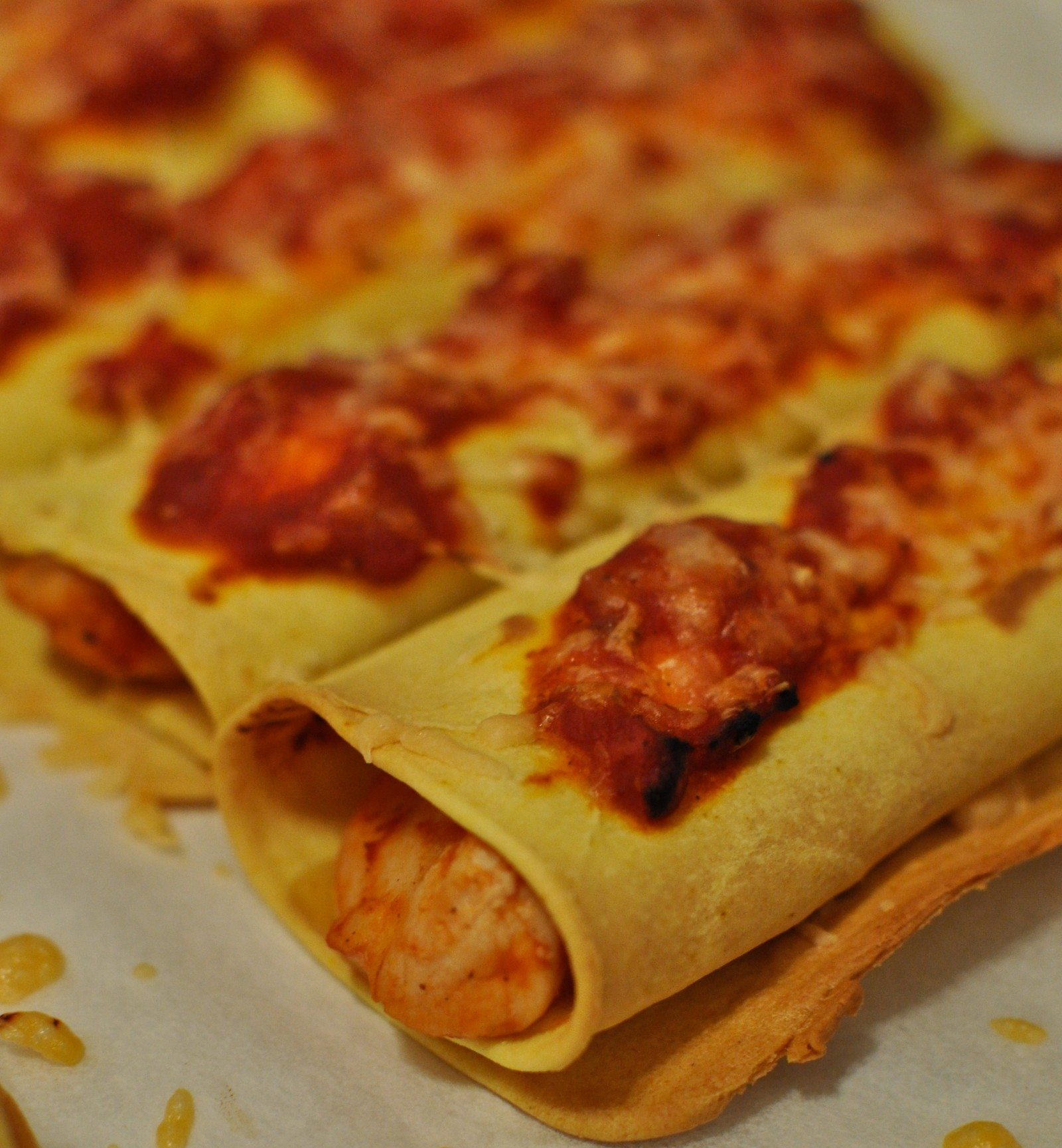 Chicken enchiladas used to be the one thing I always made for my family when I was at home. Dad used to request them frequently, the deal being that he’d cut up the chicken and I’d do the rest. It wasn’t really all the tricky considering the corn tortillas came in a packet and the enchilada sauce in a jar. It was just a case of cooking them up, rolling, baking and eating.

For some reason, you can’t buy the sauce in jars or the packets of tortillas anymore. You can only buy those expensive make-at-home packs that have a tiny pouch of sauce. I’m not a fan of paying $6 for something that I then have to add meat to. Plus I don’t like being told that something contains eight serves when Will and I use the whole packet for the two of us. It’s like it says ‘you’re a pig’ right there on the box.

So my mission, which yes I chose to accept, was to create homemade chicken enchiladas from scratch. I’ve already mastered making flour tortillas so I figured corn couldn’t be that much harder and the sauce, well I just made it up as I went.

The result? I’m pretty sure they’d pass the dad test. Probably the only difference was that mine were a little spicier than the packet mix (because I didn’t read the jar that said HOT when I thought it was mild) but I loved them.

I’d been hanging out for maize flour before I made these so when I found some at a Paddington health food shop, enchilada making was on. Good thing I did a little bit of Googling first. Ok when I say Googling, what I mean is that I checked out the Old El Paso website and found the ingredients for their corn tortillas. Turns out they’re only 20% maize flour and the nice yellow corn colour comes from the turmeric. Detective work complete it was back to tortilla making.

I just used my flour tortilla recipe and adapted it a little to make them corn. You just throw everything in the mixer and use a dough hook to bring it all together then keep kneading until it’s nice a smooth.

Form it into a ball and then cover it with plastic wrap and leave it to rest for an hour.

I like little tortillas, plus it’s easier to cook them when they’re small, so I divided the dough into 12 pieces.

There are a couple of options for rolling out the dough. Option one is you can go fully traditional and roll them out with a rolling pin. I don’t seem to have the strength to get them thin enough this way. Option two is that you’re lucky enough to own a tortilla press. Sadly that’s not me so that leaves my latest discovery, option three. I use the pasta roller attachment on my mixer. Sure they’re not perfect circles but it gets them nice and thin (thickness 4).

Then all you do is heat up a bit non-stick pan (I don’t even oil mine) and cook it on one side until bubbles start to appear then flip it over and cook the other side for another 30 seconds or so. You don’t want to over-cook them all they’ll turn crunchy.

Wrap the cooked tortillas in a damp tea towel straight away to stop them from crisping up and keep them like this until you’re ready to use them.

For the sauce I did a bit of stealth research again but really just made it up as I went.

Start by heating the oil in a medium saucepan and then throw in the flour, herbs and spices and cook them. This step is important so the sauce doesn’t taste like flour.

Once the spices and herbs are fragrant, add the onions and cook for a few minutes.

Add the rest of the ingredients and bring it to a boil then reduce to a simmer for about 30 minutes or until it thickens. Season it to taste. If you want a smooth sauce you can puree it once it’s cooled but I left mine chunky.

Line up the chicken

To prepare the enchiladas, cook the chopped up chicken in some of the sauce and then lay it in a row down the middle of each tortilla.

Roll them up and put them on a lined baking tray.

Ready for the oven

Spread them with more sauce and then top with grated cheddar cheese then it’s into the oven at 180C fan-forced for about 15 minutes or until the tortillas start to crisp up.

I’m super lazy when I make enchiladas, there’s not even a side dish. Maybe that’s why we ate the whole tray just the two of us. Enjoy!

What about you? Do you by make at home meal kits or do you make things from scratch?

Stir all the ingredients together in the bowl of an electric mixer using a dough hook and knead until smooth.

Roll the dough into a ball and leave to rest for 1 hour.

Divide dough into 12 portions and roll each one out a thin as possible into a circle.

Cook the dough on one side until it starts to bubble then flip it over.

Wrap cooked tortillas in a damp tea towel so they don’t turn crispy.

Repeat with the rest and keep them in the damp towel until you need to use them.