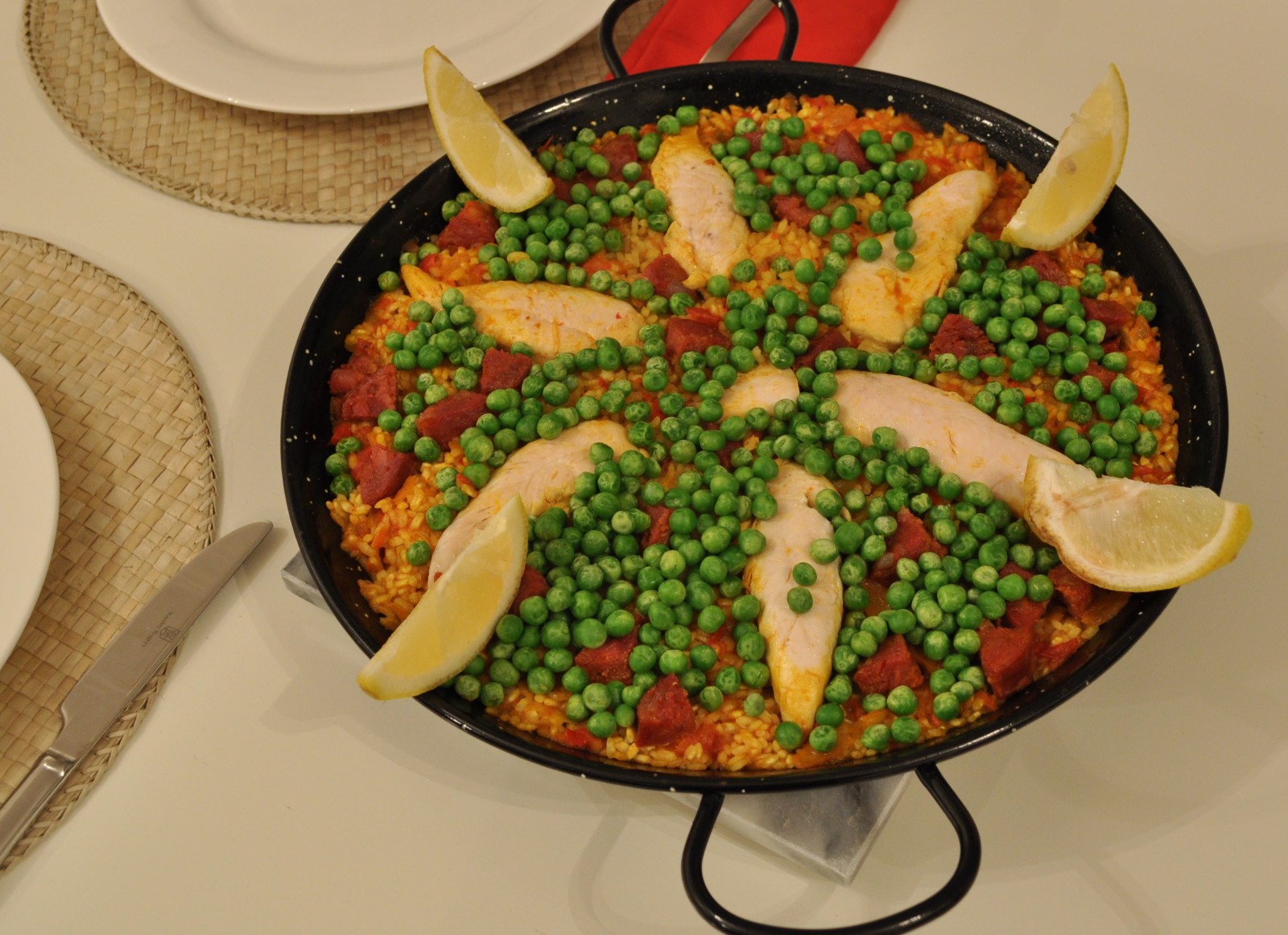 My mum makes a great paella. She learned how to do it the authentic way years ago when she lived in Spain. The other night on Masterchef, Miguel Maestra held a masterclass and showed the contestants how to make a classic paella. I mentioned it to mum a few days later and said I’d love to give it a go but I don’t want to go out and buy a little paellera for one meal. It turns out mum owns a 4-person paellera so of course I rushed home to give it a go. Not wanting to complicate things by cooking exotic meats like rabbit and playing with seafood cooking times, I opted for a classic chicken and chorizo paella. I did quite a bit of research before I embarked on my paella mission but didn’t discover two recipes that were alike. I took a little of each one and came up with my own recipe that was fabulous. It’s really not a hard dish to make although perfecting it would take quite a bit of practice.

The base for the sofrito varies between regions but I used onion, garlic, tomato and capsicum. You can make the sofrito when you make the paella but I preferred to make it ahead of time so the actual paella-making didn’t take too long.

Sautee the onion and garlic

Saute the onion and garlic in a fry-pan until the onion has softened.

Add the tomatoes and capsicum (pepper) and stir them through. Cook the sofrito, stirring, until it has reduced and thickened.

Mine took about 20 minutes to get to this stage. Set it aside.

Heat about 2 tablespoons of olive oil in the paellera. Be sure to watch it as it heats up very quickly.

Tip the sofrito and spices into the pan and cook until fragrant.

Add the rice and toss it around until it is coated in sofrito and a brilliant yellow colour. Most recipes I read call for authentic Spanish paella rice called ‘Bomba’ rice. The Bomba rice at my local deli was $15 a packet which was way out of my budget so I used arborio rice. According to my paella expert (mum) any short-grain rice is perfect.

Spread the rice into an even layer.

Pour the stock into the pan and then arrange the meat in a pretty pattern.

Leave the paella to cook for about 25 minutes. DO NOT STIR! The special thing about paella is the caramelised ‘crust’ it forms on the bottom of the pan. That is the sign of a successful paella and can’t be achieved if you touch it while it’s cooking. If your burner isn’t very big, turn the pan around every little while so it cooks evenly.

When the liquid has almost all been absorbed, add the peas. I tried to make them look pretty but there were too many. Leave it to cook for about another 5 minutes then remove the pan from the heat, cover it with a tea towel and leave it to rest for 5 minutes. This is another very important step in paella making (I’m yet to get to the bottom of why but I’ll share when I find out).

Serve the paella straight from the pan with wedges of lemon.

A little bit of crunch

See that little bit next to the lemon that looks burnt? That’s perfect paella caramelisation. Unfortunately mine didn’t have an entirely crunchy base but I was pretty impressed with my first attempt. Enjoy!

Disclaimer: I'm sorry if I offended anyone who knows how to make a perfect paella but this is my interpretation of a paella and the method I made up to make it as easy as possible.

You can buy the paellera at any good kitchen shop or at a few places online. Mum recommends the speckled pans over the plain ones. I think they're a more authentic and better quality version.