Baking wedding cupcakes – 100 of them! 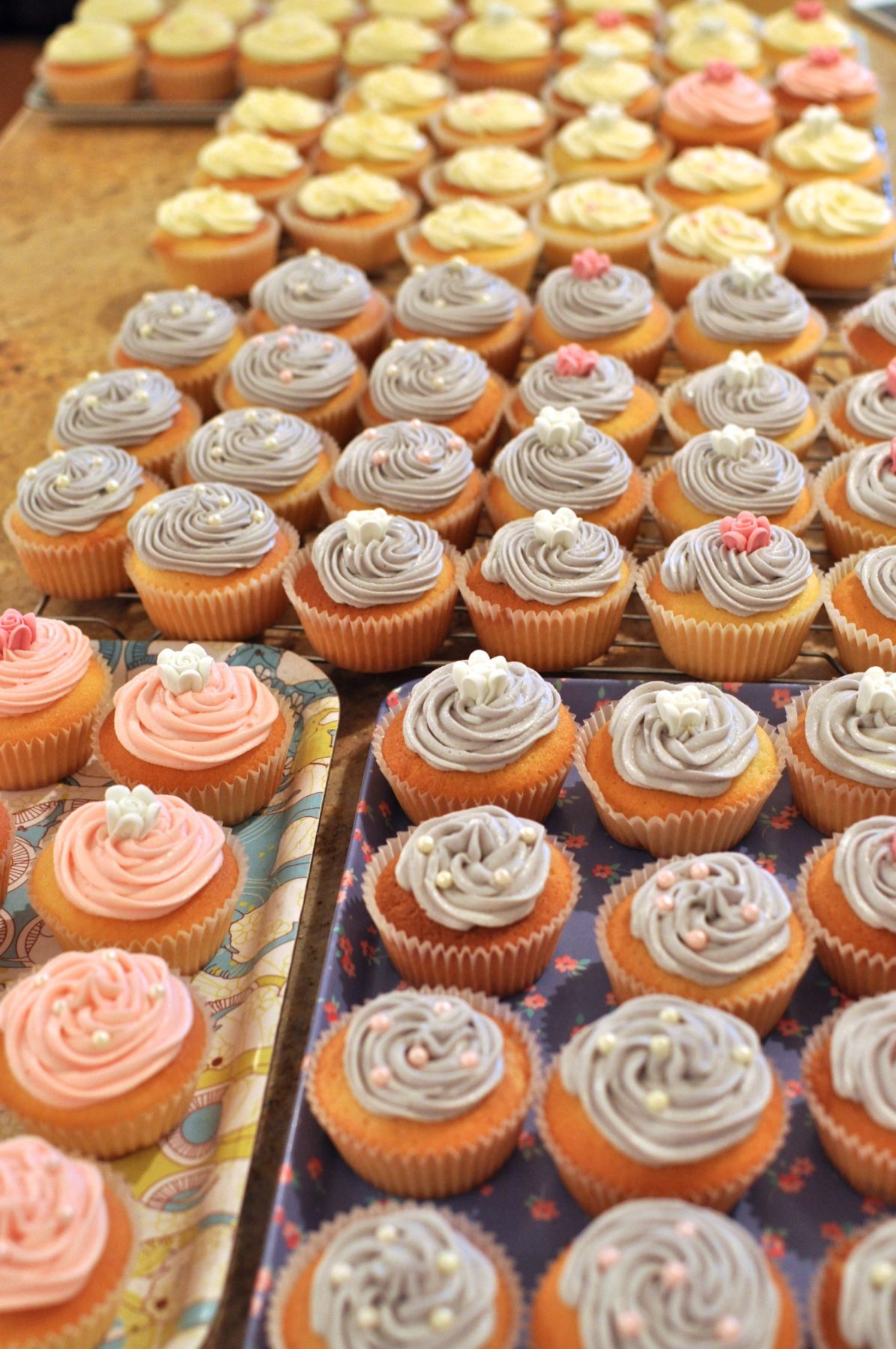 Excitement was the first emotion that struck when I got the email. An old friend from school was getting married and she wanted me, ME, to make her wedding cupcakes. What an honor.

The next thought was a little bit of panic and some reassuring myself that I could do it and indeed was up for the challenge of baking wedding cupcakes (eek!). Should you ever be in the position of having to make and decorate 100 cupcakes, there are a few things that you should know.

Tip number one: estimate the amount of time you think it will take you, then double it. These things always take longer than you think and you definitely don’t want to rush it when you’re baking wedding cupcakes. Well I certainly didn’t want to.

Ready to be filled with the sweet stuff

Tip number two: make sure you have a suitable plan for cupcake transportation. Unless you’re making them and serving them straight away in the same place, they’re going to have to take a trip in a car. Cupcakes + car movement = squished mess = stressed bride = disaster. I bought a set of disposable boxes with holes in them so the cakes are held in place.

I still told Will to drive like he was bringing his first born home from the hospital and panicked at every jolted movement but we made it. I got mine on eBay for a pretty good price including delivery.

That’s a lot of sugar!

Tip number three: do your calculations and make sure you have all the ingredients the day before. You don’t want to be racing out for a slab of butter or bag of flour half-way through.

Ingredients lined up and ready to go

Tip number four: measure everything in bulk so you don’t have to keep starting from scratch. I think I made about 8 batches of cupcakes all up so it was much easier to have two measuring sessions rather than 8.

First lot ready for the oven

Tip number five: practice first. I know my oven doesn’t cook evenly so I could only cook one tray at a time. That’s probably one of the reasons they took so long but it’s better than having some under-cooked or burnt.

Tip number six: make at least ten percent extra just in case. I had the odd one that bust its case or just looked all wrong so it was good to have backups. It’s also pretty hard to look at cupcakes all day without eating them so make a couple extra for yourself.

Tip number seven: have a practice run to work out your design. I made a trial run for the bridal shower so we could work out which colours and decorations looked best. Sometimes what you picture in your head doesn’t look quite as pretty in cupcake form.

Tip number eight: use plastic wrap. I think I saw this tip first on Pinterest (figures) but I adapted it a little myself. Because I was working with three different colours and two different icing tips I didn’t want to have to wash out the bag a million times. Enter glad wrap. You lay out a sheet of it and plop on the icing. Roll it up then twist the ends. Tie one end in a knot and then snip off the other twisted end and stick it into the bag.

Only the icing tip gets dirty so it’s nice and easy to switch between colours and you don’t waste and icing because you can squeeze it back out again. The other bonus is it doesn’t squeeze out the open end of the bag.

Iced and ready for decorating

Tip number nine: don’t lay them all out on the bench individually. Divide them between trays so it’s easy to move them around.

Cupcakes as far as the eye can see

Tip number ten: stand back and admire your work when you’re done and wonder how you turned bags of flour, sugar and icing sugar, a few kgs of butter, some vanilla, colouring and orange juice into 100 beautiful cupcakes.

Boxed up and ready to go

What about you? Have you ever had to make a large number of something? Do you have any other tips?

ps Yes the competition to win a $100 Woolworths voucher thanks to Broccolini baby broccoli has now closed. I’m still waiting for one of the winners to get back to me so check your email it could be you.