A grey and yellow nursery 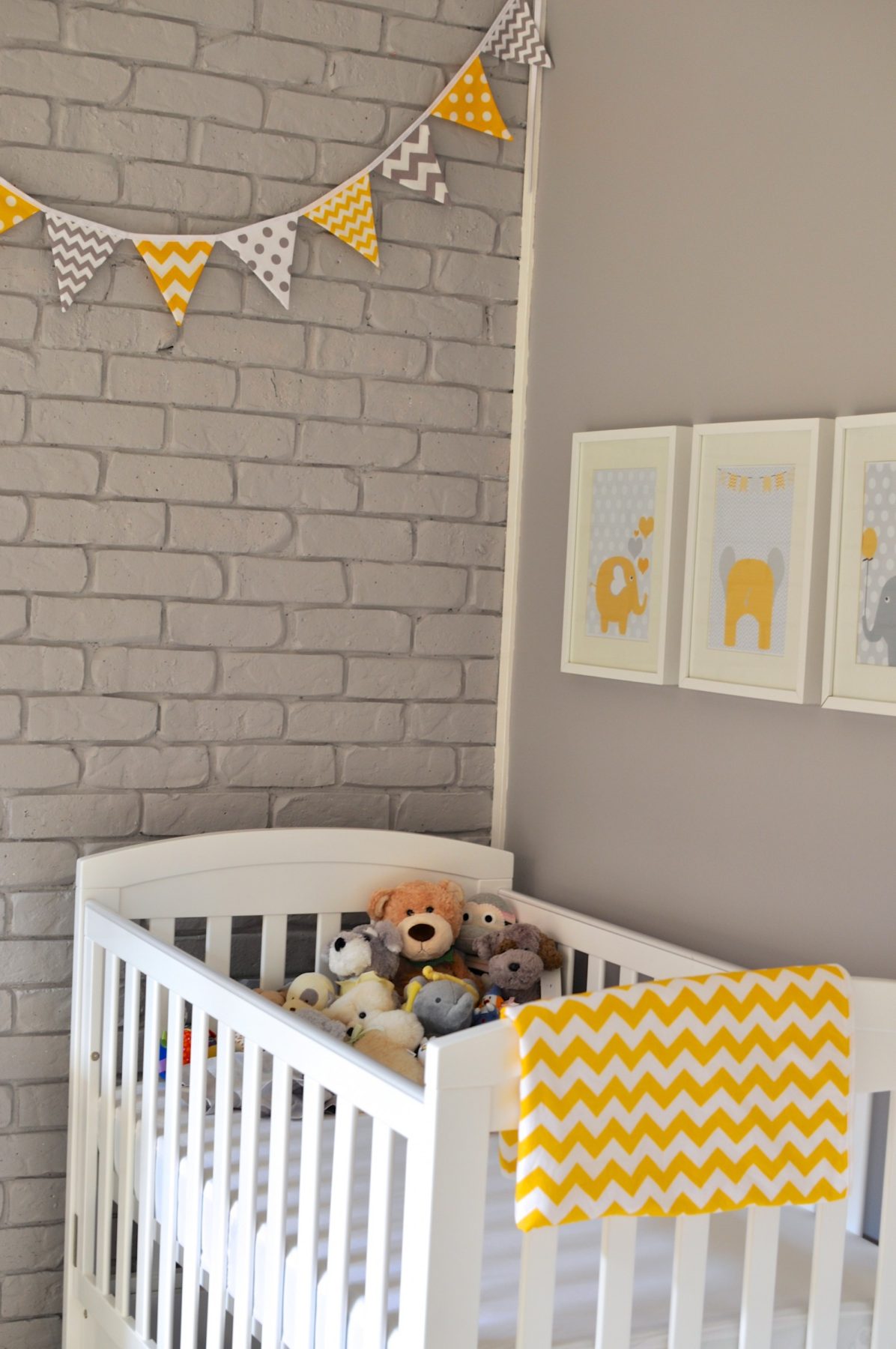 I promised a while ago that I would share the nursery with you all when it was finished and although I find it very hard to call a room ‘finished’ it’s as close as it can be with just one missing item – Bubba.

We started preparing for the little one as soon as I got the all-clear at my 12 week scan and I’m so glad we were organised. The first job was painting the nursery

Our house was built in a time when having brick on the inside was trendy. While we’ve actually grown to really like it, we didn’t think it was the best look for a nursery, plus I had my heart set on grey walls.

Choosing the colour was seriously daunting especially being our first ever foray into painting but after much deliberation we finally settled on one called Silver Bullet by Taubman’s which was a bit strange for a nursery but the white trim was appropriately called Bassinet (true story I’m not making it up!).

It took us quite a few Saturdays and Sundays but seeing the room transformed was all the motivation we needed and we’re now jealous of the baby’s beautiful walls.

Then it was decorating time although you might have spotted this dresser in the painting pic above. I picked it from the IKEA catalogue as a change table long before we even knew about Bubba. The lamp in the corner was an old IKEA one we had that I re-covered and we have our Angel Care diaper genie loaded and ready to go.

The cute yellow basket on the dresser was from my trip to Port Fairy but I have seen them in Pillow Talk since unfortunately. It took me ages to track down a grey chevron rug but we ended up finding this one at Freedom. Probably my favourite part in this pic is the bunting. I had it specially made by the lovely Vanessa from What She Got who I found through Etsy.

The adorable (if I do say so myself) elephant prints are my own creation – a combination of a a few different digital files I bought on Etsy combined using PicMonkey. I poped them in some old IKEA frames and fell in love. The matts aren’t yellow in real life they just have a tinge from the photo.

Would you believe that Will and I did no purchase one of these? Bubba has been seriously spoilt already. Bubba won’t be sleeping in here for a little while yet so I’ve got a bit of time to figure out where all these guys will live.

Bubba will be sleeping in our family heirloom bassinet which mum had restored and my Aunt made some beautiful sheets for. I will share some photos of it soon.

This little elephant was a gift from my mum. She hunted the web for ages to find a toy that played the same tune as one that I had when I was a baby. Isn’t he adorable? He sings when you pull his little tail.

This is the little music pillow that I had when I was a baby. It’s so special to have things handed down. If Bubba is a girl she’s going to have some beautiful dresses that my aunt made me all those years ago.

I haven’t quite got book storage sorted yet. I’d love to have some shelves but we’ve run out of walls. For now they are all in this three-tier basket stand that mum gave me a while ago. They were all gifts except for The Jolly Postman. It was one of my favourite books when I was little and that is the original.

Sadly nearly all the letters inside (each page has and envelope with a letter) were missing but Twinnie’s girls have the same book so I borrowed it and copied them all.

Into the wardrobe we are all set. That bag on the floor is my nappy bag (from Witchery), all packed up with Bubba’s things for hospital.

It looks like we have masses of clothes but we don’t have all that many. Surprisingly, it’s really not that easy to find unisex clothes now. I think because the trend is more to finding out the sex of the baby, they don’t make too many for ‘team yellow.’

As you can see we have managed to hunt down a few though and we have been given some adorable outfits. We both have caught each other just standing gazing at all the adorable little clothes on many occasions. I even made myself teary the other day when I transfered some nappies from the giant box to the drawer ready to use.

This outfit is my favourite. Any guesses why? We were also given the matching bibs so we have an ‘I love Mummy’ and an ‘I love Daddy.’ So cute!

Bubba already has a giant supply of toys. There will be no lack of things to play with that is for sure.

My yellow beach bag is mostly hanging because it fits with the theme but I’m sure it will come in handy for carting Bubba’s stuff around. It was just $15 from K-mart. Unfortunately you get what you pay for though. The handle broke the first time I used it but I managed to fix it ok.

It’s not a nursery tour without a picture of Bubba. This is as good as I can do at the moment. He or she is getting bigger by the day. Just when I think I can’t get any bigger, I look at a photo from a few days ago and sure enough… bigger! Not that I mind, I just can’t wait to meet the little thing and neither can Will!