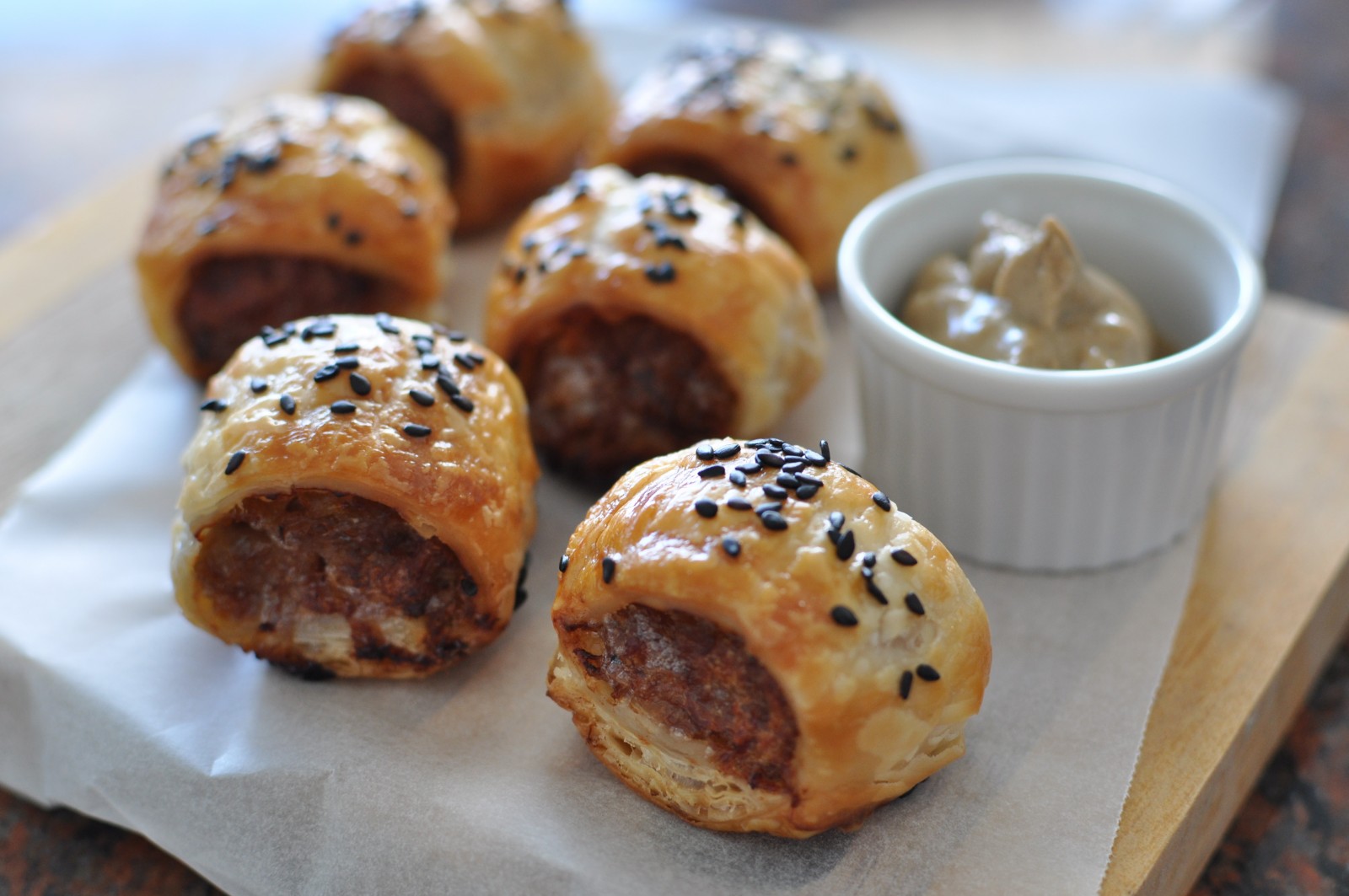 Whenever I think of party food my brain always goes straight to sausage rolls. It’s really not a party here in Australia unless you have them. Years ago, party sausage rolls used to mean the frozen variety that come in a box and have little indents down the log so you can snap off however many you need. I used to love them but I’m a homemade girl at heart.

My first ever homemade sausage roll experience was at kindy when I was four. Yesterday I mentioned how I wished I’d been able to take Home Ec. Well it just occurred to me that I took a junior version in my very very early years. I don’t remember many of the things that we made but I do remember those sausage rolls. We made enough to have one each but there was one very special one in the shape of a triangle. It was to be awarded to the best behaved child that day. Yep you guessed it, I was that child (I’d do anything for food!).

I can still see it in my minds eye. Oh so good. Since then I’ve done a lot of experimenting with sausage roll flavours. I’ve made the classic sausage rolls (which I just realised I’ve never shared, will have to change that) and chicken and feta sausage rolls and most recently blue cheese and caramelised onion.

Yes they are every bit as good as they sound. If you don’t like blue cheese then you probably won’t like these because it’s pretty dominant but I think they are fantastic. They make the perfect fancy party food and you can even make them ahead and freeze them. Just freeze the chopped up sausage rolls and then allow them to thaw slightly on the oven tray and cook them a little longer than you would if they hadn’t been frozen.

Yep that’s really it. There might only be five ingredients in these babies but you would never guess it from the flavour.

Mix it all up

All you have to do is squelch the sausage mince, caramelised onion and blue cheese all together until they’re even. I put on a rubber glove and used my hands. It was much easier this way. Another word of advice – use a much bigger bowl if you want to make life easier for yourself.

If you can’t find caramelised onions in the shops (I used onion jam) you can make your own really easily. Slice up 3 medium onions and saute them until they are really soft. Add one heaped tablespoon of brown sugar and a tablespoon of balsamic vinegar and keep sauteing them until the onions are brown and sticky and very very soft.

Lay the sheets of puff pastry out on a cutting board and slice each one in half down the middle. Spread the middle of each one with half a tablespoon of mustard and then make a log with the sausage mixture.

Very carefully roll the pastry over the filling finishing with the seam down on the chopping board.

Little sausage rolls all in a row

Slice them all up into even-sized pieces. You will need to wipe the knife every few slices or it will get very messy. You can make the sausage rolls whatever size you like but I like little bite-sized versions.

Brush them with the beaten egg (or you can use milk) and sprinkle with seeds. I used black sesame seeds. Aren’t they fancy? I don’t normally have such exotic things in my freezer but mum happened to have a little bag of them in her freezer, where I was making them. Note: I wasn’t making them in her freezer I was at her house, just to be clear.

Bake the sausage rolls at 190C fan-forced for 20-25 minutes or until they are nice and golden.

It will look a little bit gross when they’re done. The cheese starts to melt and froth a little bit which isn’t very visually appealing but oh boy does it taste good.

The recipe says to serve them with dijon mustard. I think they were perfect on their own but dad and Will liked them with tomato sauce (typical Aussie men!).

What about you, do you remember making food when you were at kindy?