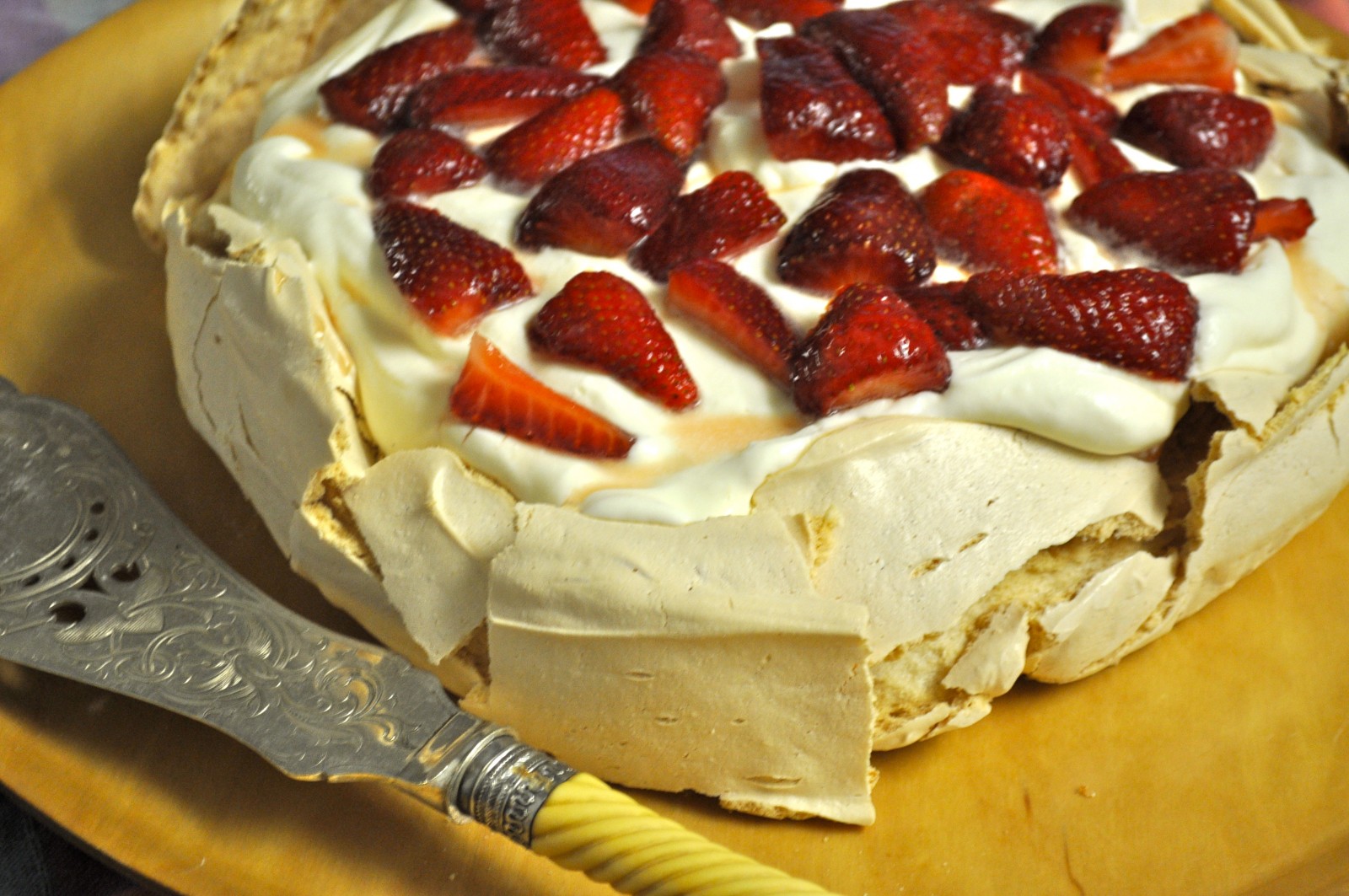 A few months ago mum and I took a weekend away in Sydney to spend a wedding weekend with my bridesmaid Kristin. We had a lovely weekend talking weddings and girly things and a little bit too much eating. It was on this trip that I had my first meal at Bills. I’d been wanting to eat there ever since I made my first Bill Granger recipe – coconut bread earlier in the year. I blogged about our meal and the star of the lunch – the brown sugar pavlova with yoghurt cream. As soon as I got home it was straight to Google to find the recipe and this week I whipped it up for my mum’s friend Annie’s (owner of the chicken with the giant egg) Birthday. It was every bit as fabulous as the real deal. I will most definitely be repeating this recipe. It’s the perfect summer dessert.

In case you’re wondering why yesterday was Silent Saturday and I’m not so quiet today, I am taking part in the Australian Pavlova Blog Hop!

Brown sugar and caster sugar together make the most delicious pavlova base.

To make sure your pavlova is round, trace out a 20cm circle on the underside of baking paper and place it on the tray. A little lesson from my mistake – if you’re going to be transporting the pavlova or storing it at all, make sure you measure your container and make sure the pavlova will fit. It will puff out an extra centimeter or two while it bakes.

Egg whites and cream of tartar

In the bowl of an electric mixer, beat the egg whites together with the cream of tartar until they soft peaks form.

This is what it looks like after a few minutes.

Adding the sugar little by little

With the motor running, add the sugars to the bowl one tablespoon-full at a time. When all the sugar has been added, stop the beater for a minute and scrape down all the sides so there are no sugar crystals left. Continue beating until the mixture is nice and thick and glossy.

Resist the urge to eat the raw mixture by the spoonful. I couldn’t I licked the spatula. Oh boy was it good. Please remember that it’s just raw egg whites and sugar so eating it raw isn’t such a good idea unless you have really good eggs. Mine were free-range organic eggs from the markets so I’m hoping they were ok.

Folding in the cornflour, vinegar and arrowroot

Heap the meringue onto the baking tray and spread it out to the edges of the circle. Try not to have too man thin bits sticking out or they will burn. Smooth it out with a spatula so it has a little bit of a border to hold the topping in. Put the tray in the middle of the oven and immediately reduce the temperature to 130C fan-forced (it will have been pre-heated to 200C). Bake the pavlova for 1 hour and 20 minutes.

Just chillin’ in the oven

Turn the oven off and open the door just a fraction. Let the pavlova cool completely in the oven. I left mine in there for 4 hours and had the air-con on. It takes a while.

After I took this photo I decided a little vanilla bean paste would perfect the yoghurt cream.

Whipping the cream, yoghurt and vanilla

To make the yoghurt cream, whip the cream, yoghurt and vanilla bean paste together until it is thick.

Mix the strawberries with the honey while the beater works its magic.

It’s hard to resist eating this too!

Mine collapsed a little but the beauty of a pavlova is it’s allowed to be messy.

Spread the yoghurt cream over the top and the top with the honeyed strawberries. Serve it immediately and enjoy!