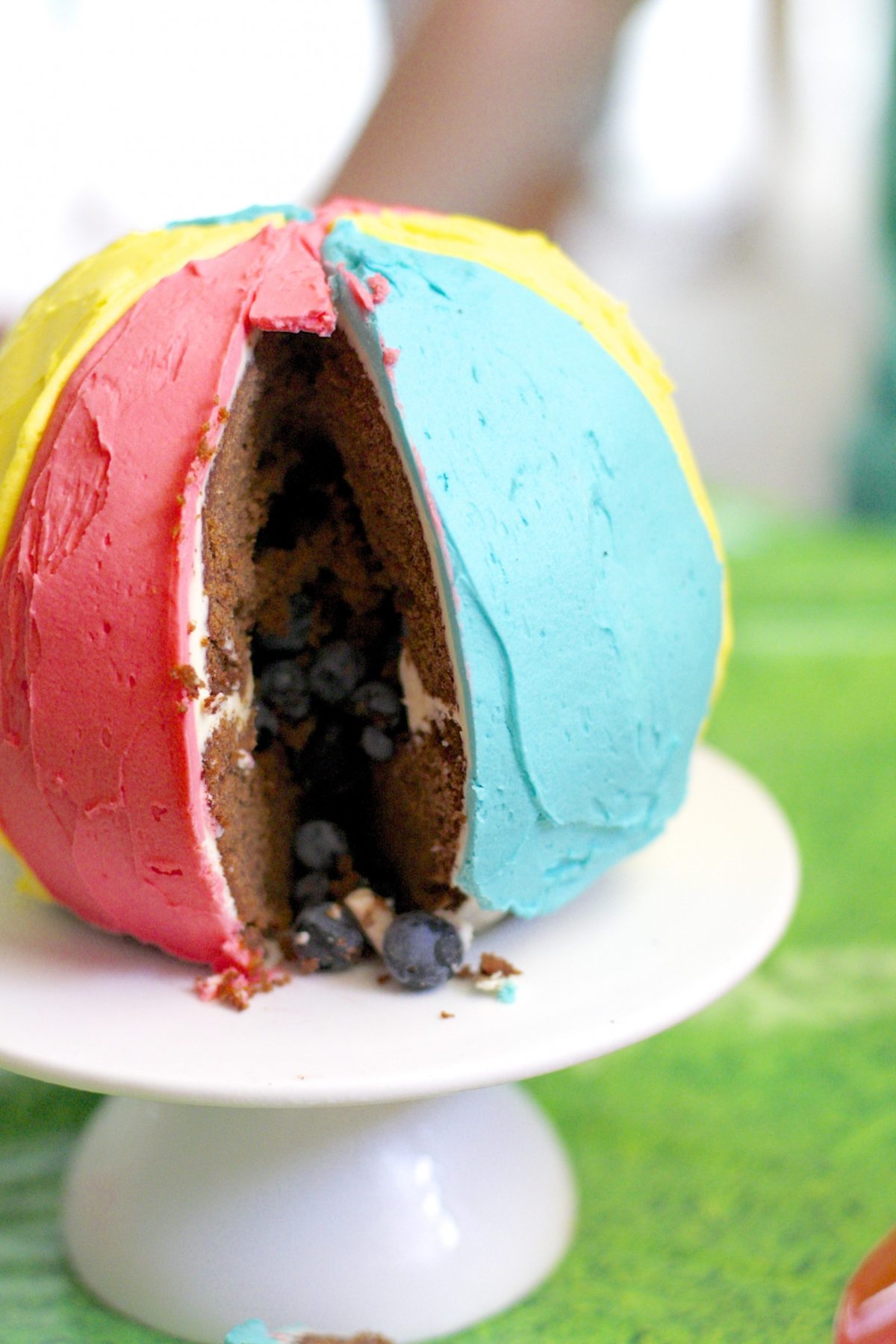 Beach ball piñata cake that’s delicious and simple to make. Perfect for your child’s birthday. It’s going to be an absolute hit with the kids.

I am now the mother of a two year old. Nope doesn’t seem any more true even putting it in words. But yes, despite my denial, Ollie turned two last Friday and on Saturday we threw a ball-themed party to celebrate.

The invitations went out a few weeks ago while we were still on holidays (side note – it’s a little hobby of mine designing these sorts of things and I’ve decided to sell them too. Ollie’s invite is available in my shop.

It’s fully editable so you can change all the details to suit your occasion.) then we came home and it was back to hectic city and I didn’t get much organising done except that I knew I wanted to make a ball-shaped cake.

I’m pretty sure when I sent the invitations Ollie didn’t know what a party was. Now every day before nap time he asks if we’re going to a party when he wakes up. The kid loves a celebration.

I think he might like it because he has recently discovered cake. With icing. Real, food-coloured, sugar-filled icing.

I didn’t want his cake to be like that. Although I knew that’s what he’d want and that’s what kids love it was just so against everything I’ve been trying to teach him about food and give his little body. I made the cake recipe up with no refined sugar. I made up a big batch of JJ’s vegan and refined-sugar-free chocolate buttercream icing.

But there was not a single good-looking decoration idea I could come up with for plain chocolate icing that wasn’t loaded with sugar. So I threw my hands in the air in defeat, whipped out my gel colours and icing sugar and went to town. I have to say, I loved it.

I’d forgotten how much I miss decorating cakes. The decoration and balls at the party were all sports themed but a basketball, soccer ball or tennis ball were just too boring to decorate – beach ball it had to be!

Ollie’s favourite food is blueberries and has been pretty much since he could eat them so I thought he’d be excited to see them fall out when we cut the cake.

He was a little overwhelmed and some of the bigger kids were unimpressed that it was filled with fruit but all I could hear while I was trying to get a few sneaky pics was ‘yes darling Claire is just cutting it, you can have some cake soon!’. It disappeared before my eyes so I’ll take that as a success.

You can find step-by-step instructions with photos of how to construct a piñata cake on my original piñata cake post. It looks tricky but it’s actually really simple. Enjoy!