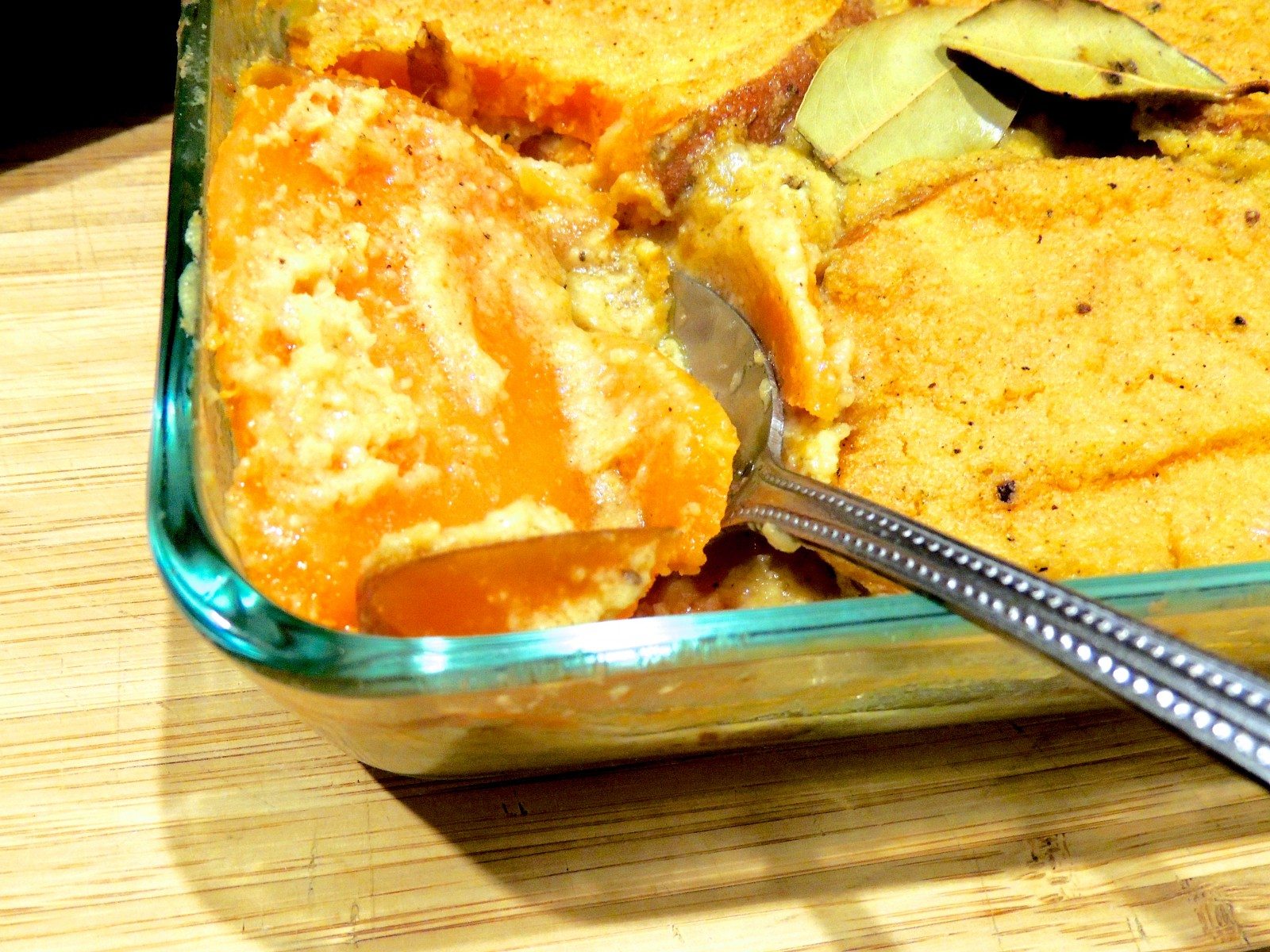 You may have noticed that I’ve been a bit experimental in my cooking lately, using ingredients like coconut oil and nuts in place of butter and milky ingredients. I’ve loved nearly everything I’ve tried but I haven’t gotten quite far enough into it to make something ‘cheesy.’ I absolutely love potato bake so when Kirsty aka The Natural Foodie sent me her guest post recipe – vegan sweet potato bake – I was excited.

Doesn’t it look just like a rich creamy sauce? There’s not an ounce of dairy in it! I can’t wait to give this one a go. Kirsty has loads of wonderfully delicious vegan recipes over on her blog. I particularly like the look of her mango coghurt and vegan guacamole. Make sure you pop by and say hi. Now ove you you Kirsty…

“I would love to do a vegan sweet potato bake to keep both camps happy, but I don’t think that exists!”

This is a direct quote from my dear friend C, during a conversation we were having regarding catering for an upcoming barbecue she was hosting with a mixed group of friends. You see, some of them are very into working out (cross fit I think) and are strict advocates of the “paleo” diet. I know nothing about said paleo rules, but apparently sweet potato is OK, while regular white potatoes are not (a travesty if you ask me, since I’m a huge lover of the humble tater).

I personally don’t subscribe to any particular “diet” perse, much like my blogger friend Claire, I don’t believe in self-deprivation. My philosophy on food is much simpler; I eat what’s kind to my body and kind to the planet. As such, the traditional cheese-laden potato bake is not something I would tuck into. Bless C for her constant support of my lifestyle; she had the veggie skewers, roast potatoes and green salad sorted. Yet her mention of potato bake had my mind racing with ideas and a sudden craving for this nostalgic barbecue-side favourite…

It’d been so long since I’d eaten potato bake that I’d all but forgotten how deliciously sinful and comforting that white cheese sauce can be. Thankfully, the challenge didn’t pan out to be so much of an, err, challenge as I quickly recalled this recipe posted by Scullery Made Tea, which reminded me that I also have the Enlightened Eating book and had in fact dog-eared that very recipe to try myself!

The only concern I had was that sweet potato tends to cook quicker than regular, starchier potatoes, so my first attempt yielded quite a mushy result. It tasted great, but potato bake texture it was not. In light of this, I recommend cooking uncovered at 180 centigrade for about 45 minutes, and to keep a skewer on hand to check the level of mushiness during the tail end of cooking.

So without further ado, or further ramblings, here’s my very much adapted recipe of sweet potato bake – which most certainly does keep all camps happy.