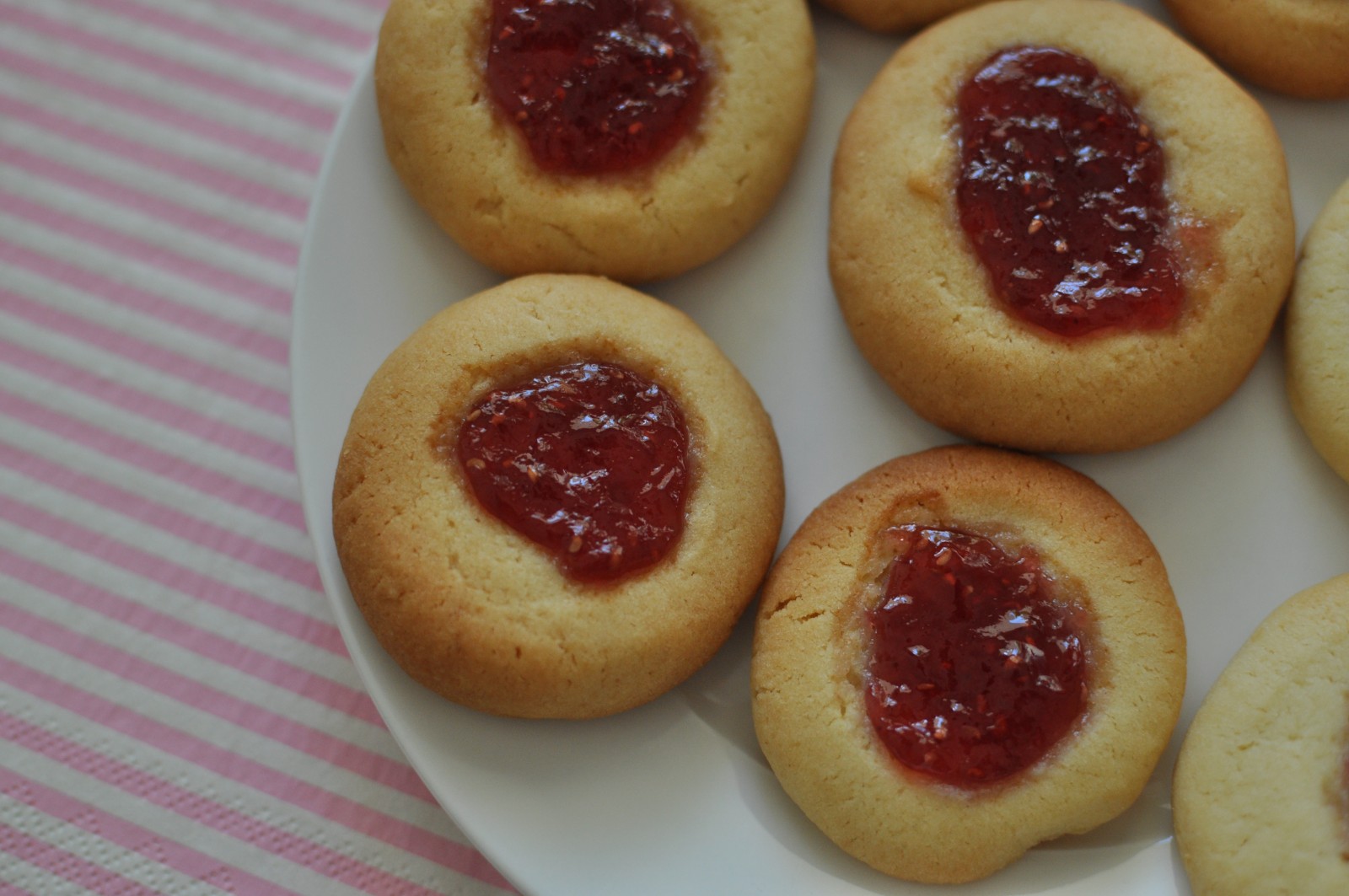 I’ve been rather in the wars lately. The week before last I took a chunk out of my forehead with my fingernail while I was putting on a singlet. A week later I somehow managed to burn myself on the iron quite badly. It’s on the inside of my arm and very unattractive (hoping that one disappears quickly!) and then this morning I was pouring water from the kettle and decided to move the thermos and poured the water over my hand – my ring hand. I thought it was fine but now it’s stinging like crazy. I can get out about two lines of typing before it’s back to the ice pack.

It must be crazy bride distraction but I am the walking wounded. My baking on the other hand, has not be affected by my clumsiness. It must be the Suzie Homemaker in me getting out lots of practice before I become a wife but I have been baking, baking and baking.

My latest creation, actually our latest creation (I had a little help from my husband-to-be) was sweet, delicious jam drops. Can you believe that before Sunday, I had never tried a jam drop? Crumbly, buttery, sweet and melt-in-your mouth are the words that spring to mind. They really are every bit as good as they look and then some.

They’re also a cinch to make. The only downside is that they don’t keep very well but that won’t matter because you won’t be able to resist eating them.

Put the butter, icing sugar, egg yolk and vanilla in the bowl of an electric mixer and beat it up until it’s nice and smooth. How pretty is the colour of that egg yolk? It’s fresh from the markets.

Now add the cream cheese to the bowl and mix it in until it’s combined. Make sure that it’s well-mixed before you take the bowl off the stand. You don’t want little chunks of cream cheese in your biscuits, or maybe you do, but it will affect the texture of them so best to mix it all in.

Take the bowl off the stand and sift in the flour, baking soda, baking powder and salt and gently stir them in with a wooden spoon. It doesn’t seem like it will all come together but keep at it and it will form a nice smooth dough.

Working with a tablespoon of dough at a time, roll them into balls and place them on a lined baking tray.

Use your fingers to gently make an indent in the middle of each ball of dough. The biscuits don’t spread out much when they bake so make sure you press them down quite a bit. Spoon about half a teaspoon of jam on top of each dough ball. You can use whatever sort of jam you like but I love raspberry.

Bake the biscuits for 10 to 12 minutes or until they start to turn golden around the edges.

Leave the baked biscuits to rest on the baking tray for five minutes. I don’t know what happened to that biscuit second from the left on the bottom. I suspect he is the victim of a bit of dough that had too much cream cheese! It was the only one that got a bit deformed.

Move them onto a wire rack to cool completely. The jam will set a bit when they cool but it will still be a little bit sticky to touch.

Serve them up straight away or keep them in an airtight container for up to two days. I doubt they’ll last that long though. We managed to put a rather large dent in our batch that afternoon (don’t worry I’m doing lots of running). Enjoy!

What about you? Have you been in the wars lately or is it just me?