Caramelised onion in the slow cooker 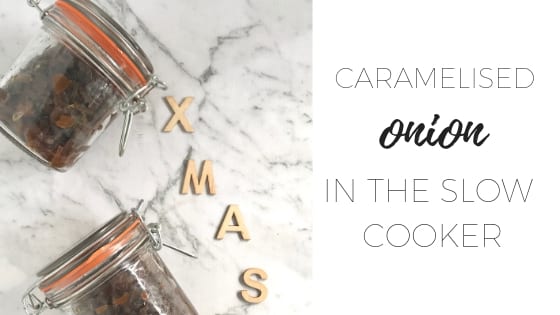 Caramelised onion in the slow cooker is possibly the easiest recipe ever and it doesn’t use any sugar. Yep – it’s basically paleo onion jam – a great Christmas gift and really easy recipe to make in bulk and freeze or preserve in jars.

Caramelised onion in the slow cooker

If you’re after some last-minute gifts for the person who has everything then look no further than caramelised onion in the slow cooker.

Seriously, go and buy a bag of onions then come back and I’ll tell you the rest of the steps.

Now slice them up. Make sure you have some goggles handy. If you’re in the membership you would have seen a nice little video of me demonstrating the recipe complete with my son’s goggles.

It was a great look let me tell you and I thought my eyeballs were going to pop out at one stage they were so tight.

Now put them in the slow cooker and turn it on.

Well you do have to bottle it up in about 12 hours but then you’re done.

The. Easiest. Recipe. Ever.

No sugar needed. Just a kg or so of onions and a few jars to bottle it up in.

I made my most recent batch to go in caramelised onion and blue cheese sausage rolls for our street Christmas party and they were a serious hit.

I don’t mean to brag about my own cooking (I didn’t invent the recipe so I can’t take all the credit anyway) but these were all gone within 5 minutes of us arriving and I made 40 parcels of the little deliciousness.

I had three. Three sausage rolls. They were really good and it’s Christmas.

Store the jam in clean glass jars. If you’re using a recycled jar, let me show you how to remove the labels from glass jars quickly and easily.