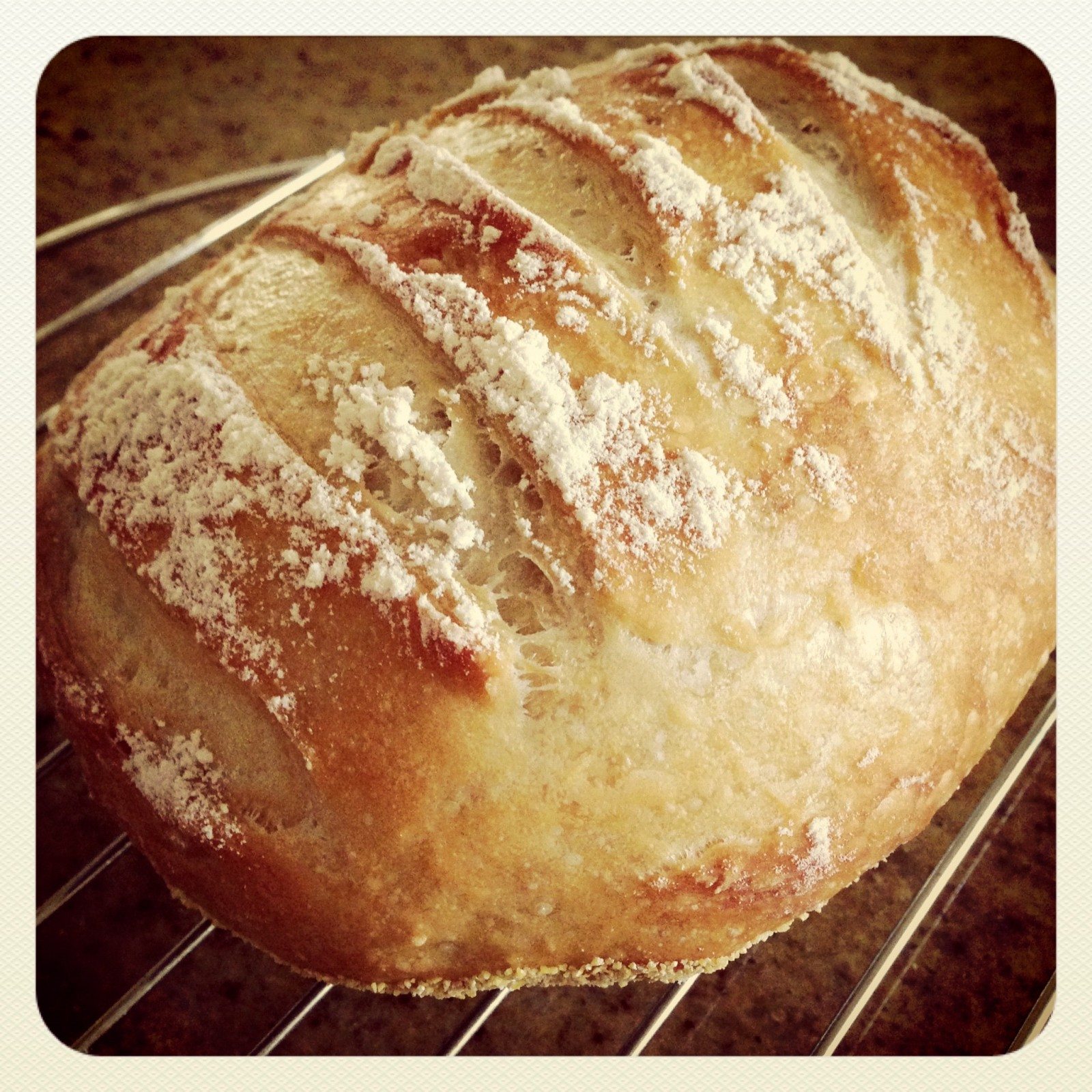 . It was love at first bite with this one let me tell you. I’ve quite gotten into home bread baking in the last couple of years. Baking anything is satisfying but there’s just something special about making your own bread. I like to think it transports me to yesteryear a little (just me?).

When it comes to me and bread baking it has to simple. If a recipe is too much work or has too many steps then I know I’m more likely to walk down the road to the bakery than to crank up the oven and whip out the flour and yeast. By far the simplest recipe I’ve found so far is from my new book.

I’d heard lots about it over various blogs but was a little bit skeptical. A couple of weeks ago I was ordering Nigella Christmas

through Amazon. It was $14 and postage was about $15 but if I increased my order to $25, postage was free. I took that as a sign that I had to order Artisan Bread in Five Minutes a Day

after all, at $14, the postage deal made it practically free.

That weekend I carefully read through the introduction and all the steps to make sure I was up to speed then set to work. This is how easy it is. Measure out the water, yeast and salt into a large container then leave them for 10 minutes for the yeast to start working its magic.

Then you measure in the flour on top.

Mix it all together then go and do something else for 2 hours.

I was amazed by how much it grew in that time. That’s about the most work you have to do. After that you can tear off a piece and bake it or put the lid on, but not totally sealed and pop it in the fridge. There’s no kneading, no proving just rip, fold and bake.

Ready for the first loaf

Over the next two weeks, whenever you feel like fresh bread you just sprinkle a bit of flour on top and rip off a chunk.

For my first attempt I made a standard round loaf. I just ripped off a chunk, folded it under itself on all four ‘sides’ then left it to rest for 20 minutes.

I think you’re just leaving it to get to room temperature rather than leaving it to rise at all. The rising seems to happen in the oven.

Ready for the oven

You don’t even need the oven to come to the right temperature. 20 minutes before you want to bake the bread (I leave mine to rest for 40 minutes total), you turn on the oven with a pizza stone in the middle and a baking dish in the bottom. To bake the bread, you slash it a few times and then slide it onto the hot stone. Quickly pour a cup full of hot water into the baking dish in the bottom of the oven and shut the door.

The water in the bottom makes the oven nice and steamy which helps the loaf develop a nice crust.

About 30 minutes later this is what you get. Not bad for a first attempt is it? Apparently the darker the crust the better the bread and even if it looks like it’s burnt, because of the high water content of the dough, it shouldn’t dry out. Don’t totally char it though because I’m pretty sure that would ruin it.

With the basic recipe I made two little personal baguettes for a picnic lunch with a friend.

A couple of days later I took some breadrolls over to my grandma.

We sliced up another loaf for lunch. If you like bread with a thick chewy crust and tender dough with a hint of sourdough flavour you are going to love this book. I think it would make a rather nice Christmas present too perhaps with a bag of baker’s flour.

I’m not going to share the actual recipe today because the whole book is based on the original recipe, so that wouldn’t be too nice to the lovely authors but I wanted to show you just how easy and fantastic it is. Once you get the basics down you can make pizza bases, a huge variety of breads and then even delve into the sweet section like Chris’s Challah bread.

Just so you know, I have no affiliation with the book at all I just like to share things I love.

What about you? Do you bake bread at home? Have you tried Artisan Bread in Five Minutes a Day?