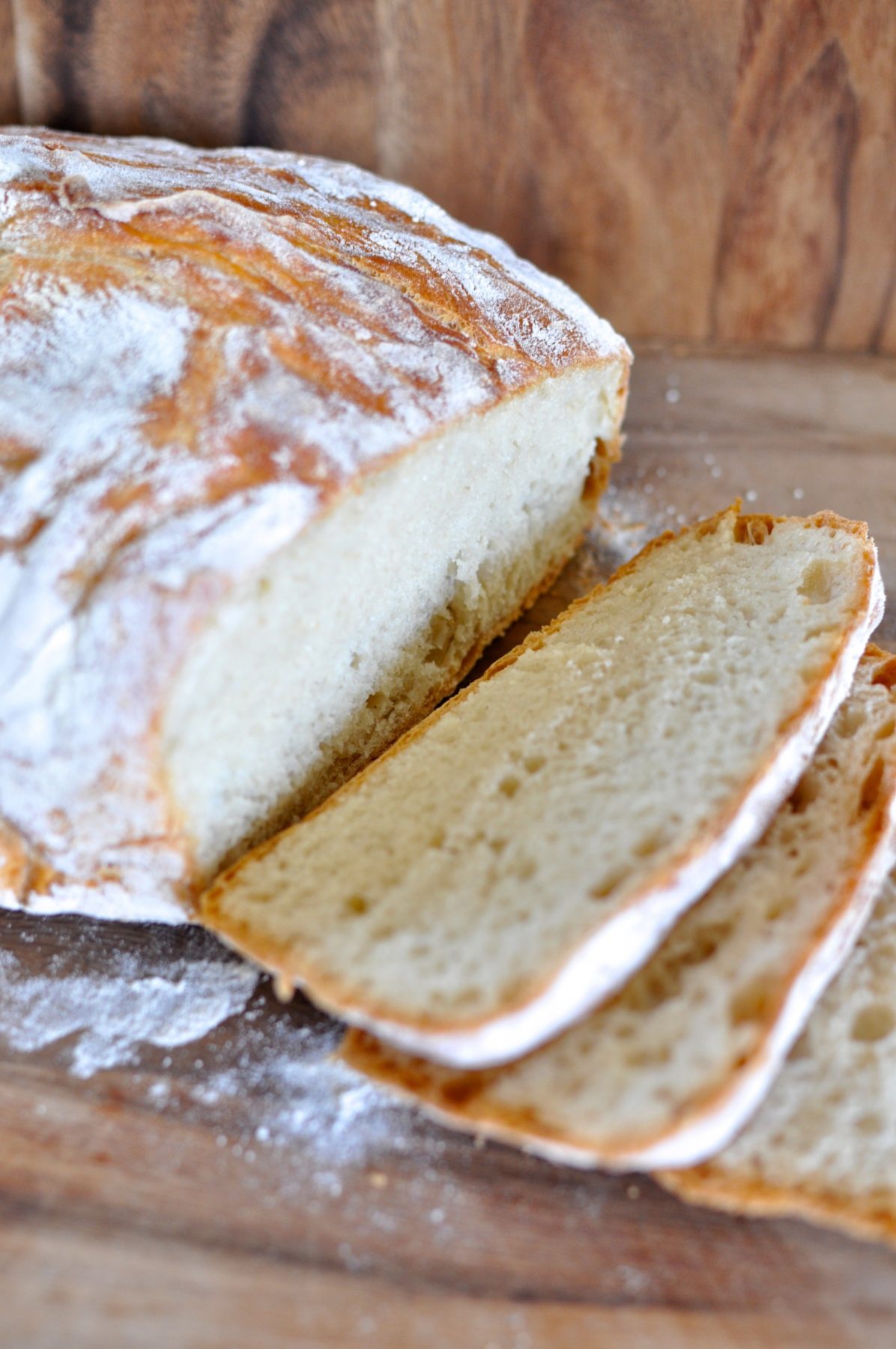 When I was younger I was a champion sleeper. So much so that mum had to wake me up to take me to kindy (I’m pretty sure it started about 9.30am!). I was even such a sleeper that on holidays I would sleep through buffet breakfast. Can you believe it?

On a family holiday to Fiji when I was about 12, every morning my sister and I would pass on buffet breakfast and instead order it to our room when we decided to emerge from slumber. The order was the same every day.

What arrived at our door 20 minutes later was a warm, crusty loaf of the most delicious bread either of us has ever tasted. Each morning we polished off the whole thing spread with a little butter and Vegemite.

While my sleeping habits have changed a lot since then my love for a fresh loaf of bread has only grown and my love for homemade bread is still growing.

Entitled ‘amazing no-knead bread,’ this bread was screaming for me to make it from the second I laid eyes on it. It looked just like a loaf you’d get at a fancy bakery. During the whole process I was hesitant. I couldn’t believe that half a teaspoon of yeast in 6 cups of flour could amount to such deliciousness but that little bit of yeast really worked its magic!

It does take a while from start to finish but there is seriously little actual work involved.

I’ll do a little math for you:

– to eat it at 7pm, start the bread before bed the night before

Step one – the dry ingredients

In a very big bowl, I used the bowl of my electric mixer, mix the flour, yeast and salt together.

Add the water and mix it in. I was a bit lazy so used the dough hook to bring it all together. You just have to mix it until there are no more dry bits. I added a bit more water than the original recipe (I’ve added it in my recipe below too) because it seemed too dry.

That’s it, that’s basically the hardest part. Now you just need to cover it with plastic wrap and walk away for 12-18 hours. I made mine at about 5 in the afternoon on Saturday.

After a big rest

The next day at about 8am this is what it looked liked. When it’s ready for the next step it will have doubled in size and be bubbly on top. It will also smell yeasty (in a good way). When you first make the dough it just smells like wet flour so you’ll notice the difference.

Now you need a lot more flour. Sprinkle it out on top of a clean tea towel (a cotton one).

I just realised I made this step a lot more difficult. I didn’t read the part where it said to tip the dough out onto the towel. I thought I read to pick it up and use your hands to shape it. It was mighty tricky balancing all that dough in my hands but I somehow managed.

The easier way to do it is to turn the dough out onto the tea towel. Flour the top of the dough and your hands and then gently start tucking the dough under itself until it makes a smooth ball like the photo above. It should only take a minute or two. You’re not kneading, just shaping.

Dust the top of the dough with more flour and then wrap it up loosely with the tea towel or cover it with another one. Now it needs another rest for 2 hours.

After 1.5 hours, it’s time to pre-heat the oven and the pot. I used a bit cast iron pot for my loaf. You need a pot with a lid that can withstand up to 210C.

Pre-heat the oven to 210C fan-forced with the pot inside.

One big ball of dough

After two hours the dough will have doubled in size again. Mine was enormous.

This is the tricky part.

Take the pot out of the oven and place it on something heat-proof. It’s best not to do this on top of the stove because the flour does fly around a little and a bench top is easier to clean.

Get your hands under the tea towel and flip the dough out into the pot so it’s seam-side down. It doesn’t need to be pretty, just in the pot. Mine was quite unattractive but I think it made for a very pretty finished loaf.

The recipe said that it’s done when it reaches 200 degrees. I assumed it meant 200C but the other temperatures are in Farenheit so I’m not so sure. Either way, mine was mighty hot inside when it was ready.

Cooling aka the longest 20 minutes of my life

Turn the bread out onto a wire rack to cool.

‘I can’t cut it until it stops talking.’ I said to Will. Without even looking up he said ‘oh ok.’ I think he must be rather used to my kitchen craziness by now. You have to listen to me too though. Do not cut the bread until it has cooled and stopped making noises or it will be tough and not tasty.

Admire your bread in all its glory.

When it has cooled, slice it up and devour it quickly. If you like warm bread you can indeed warm it up again or toast it, you just can’t eat it warm from the oven after its first baking.

I had my first slice with mushrooms and feta and was so eager to get into it I nearly forgot to get a photo. Apparently it lasts a few days. I wouldn’t know. Someone ate all mine within 24 hours. Enjoy!

What about you? Have you ever slept through breakfast? Do you like to make your own bread?