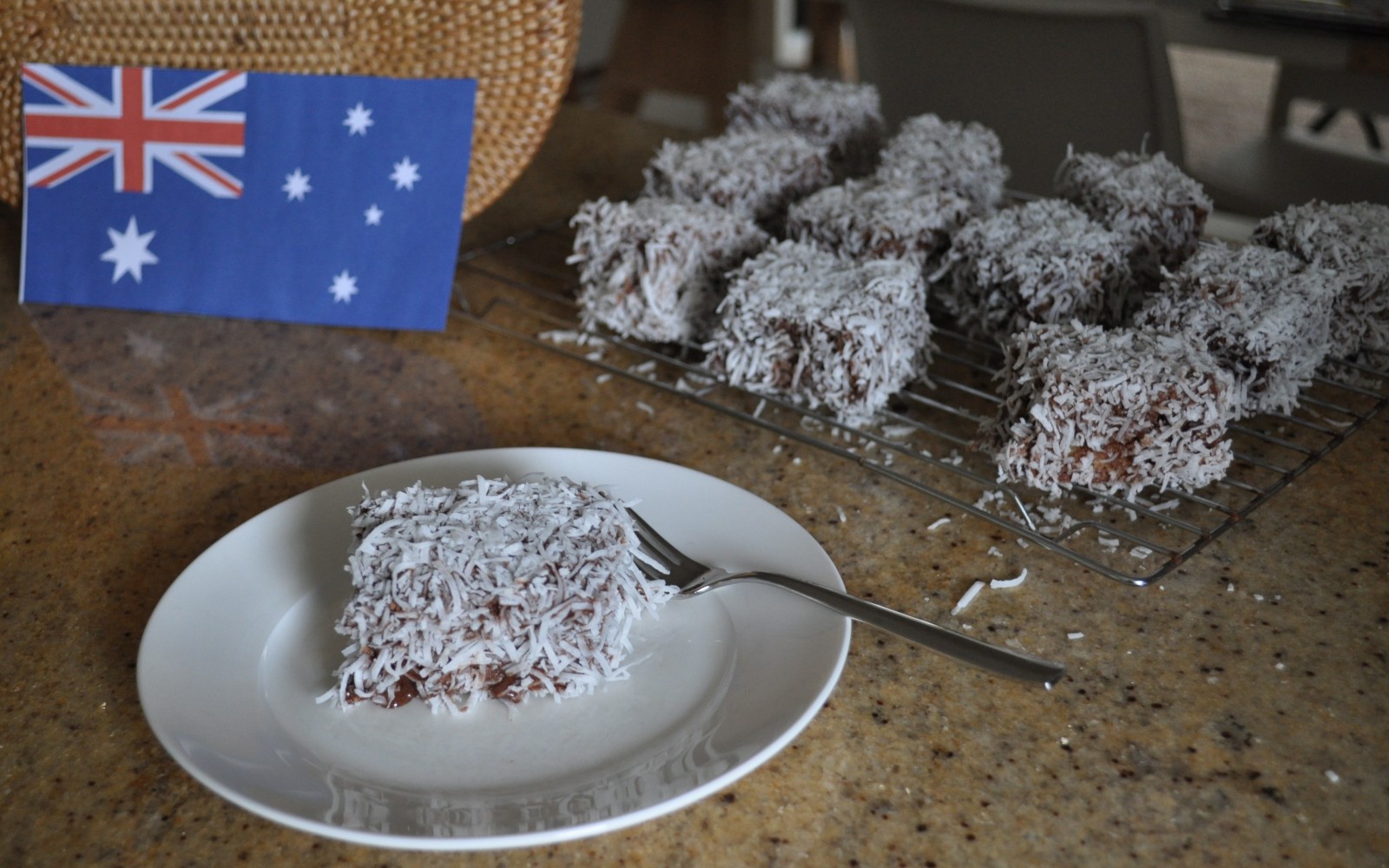 Please don’t judge me for what I’m about to say. I am an Australian I swear but until this year, to my memory I have never tried a lamington. Mum said that we used to make them a lot when I was little but I would never eat them. Well this year I had to change that. I tried my first lamington while on a boat cruising on the Noosa river on the second day of 2011 and I am converted. Yum!

I thought it only fitting that I whip up a batch of these myself for our National holiday – Australia Day. I’ll admit that they are a little fiddly to make but they were definitely worth the effort. There are heaps of recipes out there but I went straight to my Women’s Weekly ‘Bake’ book.

I must also apologise for my lack of posts over the weekend. I was in Melbourne and the ridiculous price that hotel wanted to charge me to use the internet was way beyond anything this scrooge would pay. Don’t worry I have lots of Melbourne food stories coming very soon.

There aren’t too many ingredients in the sponge base for lamingtons. In fact if you bundle the flours into one it’s just eggs, flour and sugar.

The first step is to beat the eggs for about 10 minutes or until they’re thick and creamy. Boy am I glad I got a Mix Master for Christmas!

This is how thick and creamy they get. They seriously increase in volume too.

I’m sure I’m not the only person in the world who does this but quite often my brain starts playing a song related to whatever I’m doing (see the caption for an example!). Does that make me strange or do other people do this too? Next add the sugar a little at a time and make sure it’s fully dissolved between additions.

Sorry, no song for the flour. Gently fold the flours (after sifting them THREE times) into the sugar/egg mixture.

Keep folding until the flours are all combined. Don’t forget to scrape the bottom of the bowl as you fold. Somehow the flour seems to get stuck down there.

Pour the batter into your prepared pan. I had way too much mixture (or my pan was way too small) so I also made some little cupcakes. Bake the cake for about 35 minutes. The cupcakes take a little less time so keep an eye on them. They’re cooked when a skewer inserted in the middle (ouch!) comes out clean.

When the cake is cooked, cool the slab on a wire rack covered with baking paper. I think this is to stop it sinking through the bars.

While the cake is cooling it’s time to make the icing. Sift the icing sugar and cocoa into a bowl (or jug like I did for some reason) and add the melted butter and milk. Stir it until it’s smooth. If it’s too thick add a little more milk (add icing sugar if it’s too runny).

Ready for the final touch

When the cake is completely cool cut it into squares ready for icing. A little tip I learned – peel off the ‘skin’ from the top of each piece. It kept falling off in the icing and drove me nuts! Another thing you can do to reduce the crumbs is to either refrigerate the sponge (that’s what I did) or freeze it. If you were to freeze it you could make it ages in advance then ice on the day you need them.

Prepare your icing station. You need to put the icing in a big bowl, spread a thick layer of coconut on a plate and have a spare wire rack ready for the finished lamingtons.

Going for a dip

The method for this is completely up do you. I used two forks and flipped the cake around in the icing then lifted it up and drained it for a bit before moving on to icing station two… coconut.

The coconutting method I found most effective was to place the iced cake on a little mound of coconut then sprinkle another little mound on top and pat it down. Then sweep the coconut around the sides and pat it in. Lift it up and give it a shake to get rid of any excess.

Place them on the clean wire rack to set then enjoy!

Here are the little bite-sized versions I made as well.

I hope you have a wonderful Australia Day! It’s my grandma’s 93rd Birthday so we’re having a big Birthday bash.

I made the cake on a Wednesday, iced it on Thursday and the leftovers were still pretty good on Sunday. I would say it keeps fresh for at least 3 days in an air-tight container.