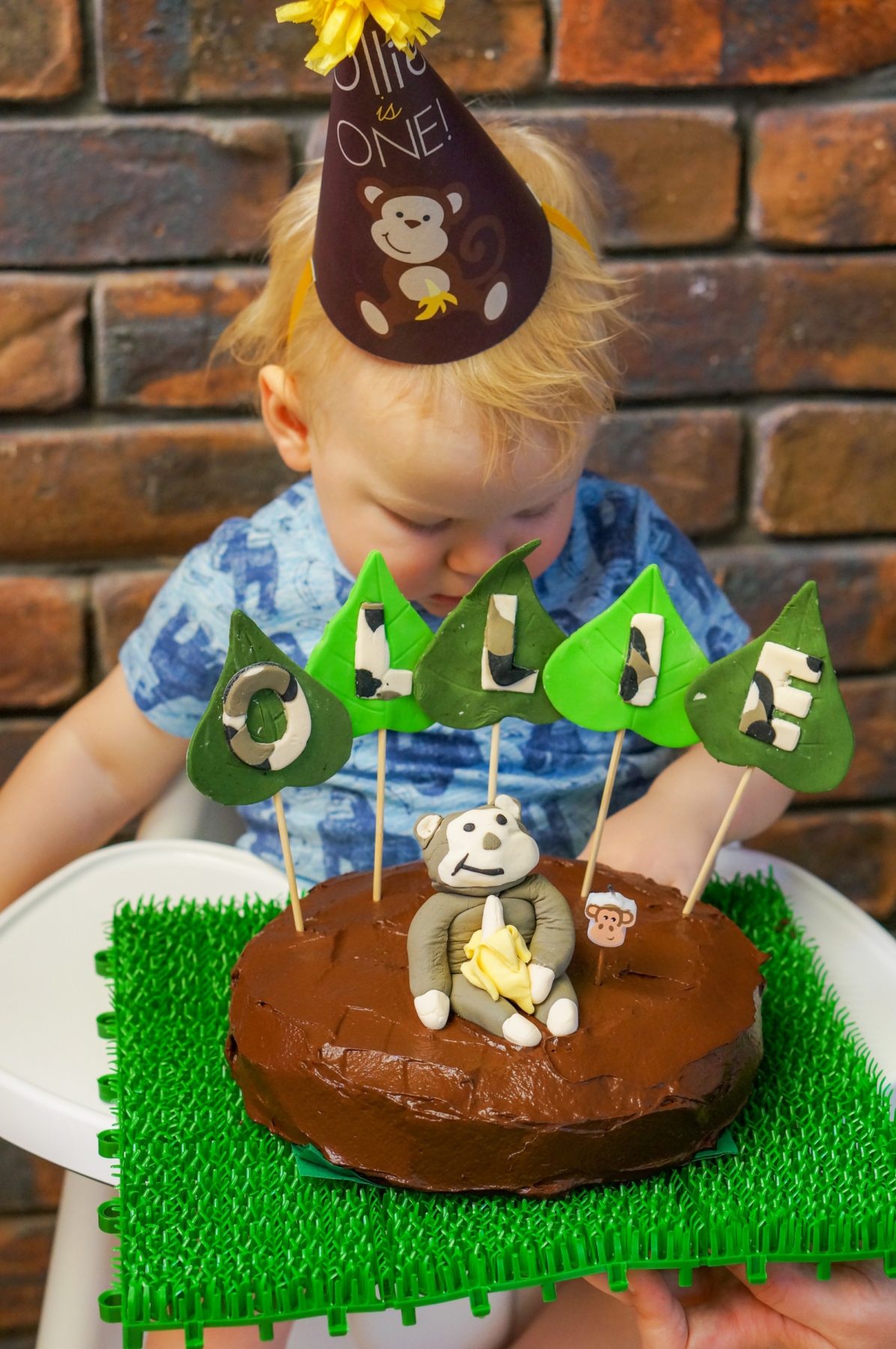 All my life I have dreamt of the day that I can hold a Birthday party for my child and last Sunday, that day arrived. I think I was almost as excited as the Birthday boy. We got him up early with the intention of manipulating his sleeps and getting him down before the party.

He spent the morning helping Mum and Dad blow up balloons while Will and I set up the party. When it came time for nap, he would have no such thing. He laughed and giggled and jumped in his cot for 1.5 hours until we gave up and got him up. That day he was up for 8 hours straight without so much as a whimper. There was too much fun to be had.

In case you haven’t caught on, the theme was monkey/banana. Monkey because Ollie is a little monkey and banana because he loves them. We kept the decorations pretty simple with a few themed items picked up from $2 shops, bananas and cardboard bananas (thanks for cutting them out Mum!) and green and brown balloons.

I made the invitation and the little poster of ‘Ollie stats’ myself using PicMonkey because I was too cheap to pay for the professional ones on Etsy. I think it turned out ok. I also made the labels for all the food and cupcake toppers too.

Family and friends pitched in with the food so don’t worry I didn’t do it all myself. I was responsible for the sausage rolls and the monkey toes – which I actually made myself by twisting regular sausages into smaller ones.

We also had jungle juice (aka soda with a colourful assortment of fruit) in my fancy beehive drink dispenser.

A note on party prep – my best tip is to start making things a few weeks before and freeze them. It’s so worth it to not have to run around like a crazy person the day before. I made the sausage rolls, sausages, monkey eye biscuits and the Birthday cake and froze them. Nearly everything will freeze if you wrap it well.

This is my favourite photo (thanks to my sister for taking the photos) of the day. We put Ollie in his chair and he sat waiting for his cake. Have you ever seen anyone look so unimpressed with being taken away from playing?

He’s such a good sport though and didn’t even try to take his hat (I made that too) off.

We all sang Happy Birthday and I got a bit teary that my baby boy is already one.

As well as the date and banana Birthday cake there were monkey eye biscuits, apricot and coconut rolls, healthy chocolate pudding, mini fruit skewers and the best ever chocolate mud cake cupcakes.

I went inside to put Ollie’s high chair table away and when I returned just a minute later the kids had devoured the chocolate cupcakes. Just shows, you can try and keep it all healthy but kids will be kids.

Everyone had a wonderful time and the kids all played so well together. Ollie had such a fun afternoon he was still awake giggling in his cot an hour after we put him to bed. He must have passed out eventually when he couldn’t keep his little eyes open a second more.

Thank you to everyone who celebrated with us and made our little man’s first Birthday so special.